Rasa - The Myanmar government’s bloody crackdown on the Rohingya Muslim community has sparked outrage across the globe. 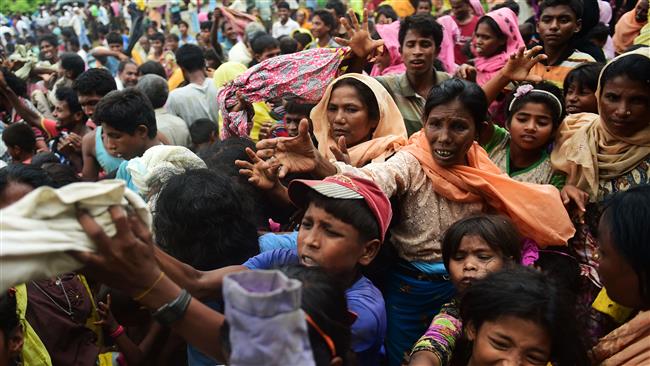 RNA - Hundreds of thousands of Rohingyas, who are denied citizenship and have suffered years of persecution in the Buddhist-majority state, have been forced to flee the country in the wake of a massive brutal crackdown by the government which the UN rights body has described as “ethnic cleansing." Shabbir Hassanally, an Islamic scholar and activist, as well as Gearóid Ó Colmáin, a journalist and political analyst, in an interview spoke obout this humanitarian crisis.

Shabbir Hassanally believes that the plight of the Rohingya Muslims is nothing new, adding that the minority group has been subjected to large-scale persecution since 2013.

He also noted that there is plenty of evidence to prove that the Rohingyas are being massacred, have no rights in Myanmar and are not even counted among the 130 ethnic minorities that exist in the Southeast Asian country.

The activist further described Myanmar's de facto ruler Aung San Suu Kyi as a “warmonger” and a “terrorist” who has no legitimacy in holding the Noble Peace Prize because of her complicity in the murder of Muslims in Rakhine State.

Myanmar’s forces have been attacking Rohingya Muslims and torching their villages across the state since October 2016. The attacks have seen a sharp rise since August 25, following a number of armed attacks on police and military posts in the troubled western state which the government blames on an armed group purported to defend the Rohingyas’  rights.

And Nobel laureate Suu Kyi has done almost nothing to stop the heinous atrocities against the Rohingya.

Hassanally further asserted that even if a small percentage of people within the Rohingya community are causing problems, that in no way justifies the genocide of an entire people.

“You have a people that have lived for generations and generations in a state of a country; have their rights; have their identity stolen from them; and you have people who profess to be pioneers of human rights and speakers for human justice and all this sort of stuff, saying no there is a problem here. These people are all terrorists. Like I said, there will be some insurgency within the Rohingya. This is normal, it is like everywhere … everywhere you have people who do not like what is going on, they want to take action,” he said.

Elsewhere in his remarks, the analyst denounced the comments by the other panelist Gearóid Ó Colmáin who rejected claims of genocide against the Rohingya as “bizarre” and “ludicrous.”

Ó Colmáin said what is happening in Myanmar is not a state-sponsored genocide against an ethnic group; rather, it signifies an extremist insurgency against the government.

“Human rights groups are at the forefront of the media disinformation war against the authorities of that country. This is essentially a war of globalization against a nation state. It is a repetition of what we have seen in Syria,” he stated.

The analyst went on to say that many of those who are creating this narrative of a genocide by Myanmarese authorities against the Rohingya are the same people who support terrorist groups in Syria and have been creating false-flag terror attacks against the Syrian government.

Hassanally exclaimed over Ó Colmáin’s remarks in the light of recent remarks by Iran’s Leader Ayatollah Seyyed Ali Khamenei who condemned the brutalities perpetrated against the Muslims in Myanmar.

Addressing the issue, Ayatollah Khamenei called on Islamic governments to exert political and economic pressure on Myanmar’s “cruel” government to make it stop the deadly crackdown on minority Rohingya Muslims.

Ó Colmáin denied accusing Iranian authorities of supporting terrorists, but said he was critical of some aspects of Iran’s foreign policy, particularly with regard to the Rohingya crisis.

He further claimed that the modus operandi of the “Rohingya terrorists” is to basically use fake images, emphasizing that there is no evidence to suggest that genocide has been committed against the minority group.

Tags: Muslim Rohingya
Short Link rasanews.ir/201oTr
Share
0
Please type in your comments in English.
The comments that contain insults or libel to individuals, ethnicities, or contradictions with the laws of the country and religious teachings will not be disclosed