Rasa - The Saudis cannot win the war they launched against the neighboring Yemen two-and-a-half-Year ago due to the resistant nation's strong inclination to maintain its dignity. 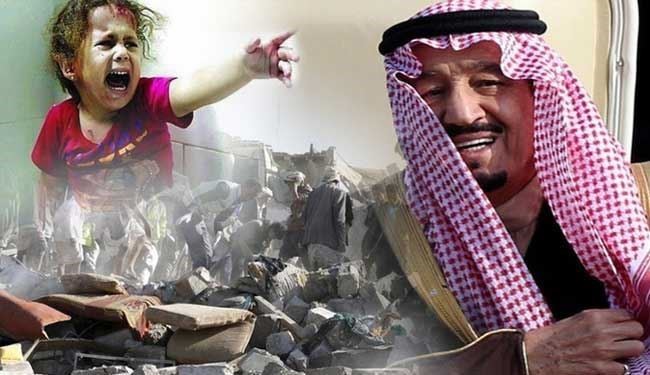 RNA - Saudi Arabia's decision to launch a bloody aggression on Yemen was a disastrous mistake, and its expenses are increasingly dragging the Arab kingdom into a dormant economic crisis and forcing the wealthy princes and the investors out of the country.

The outcome is a set of consequences causing popular discontent at home. The country witnesses growing poverty and Al Saud regime is reluctantly heading towards privatizing the state-owned companies like the oil giant Aramco and raising the taxes. Another major ramification is collapse of value of the Saudi currency riyal. There is a notion that the Persian Gulf Arab monarchy is far from being able to sustain momentum in its campaign as it is hit hard by the economic crisis outcomes.

Reports suggest that the oil-rich kingdom now has budget deficit of about $100 billion. Economic performance figures note that many projects in Saudi Arabia are now suspended and many companies have gone bankrupt and consequently thousands of construction workers have been laid off. The regime has reportedly introduced a new taxing mechanism in a bid to balance the budget.

Saudis are bearing the brunt of a troubled economy while on the other side the empty-handed Yemen, on the strength of a cohesive camp led by patriotic forces, is showing legendary resistance to the aggression launched by a Saudi-led Arab military coalition in March 2015. The coalition of Yemeni forces, led by the Ansarullah movement and the loyal army, signal the fact that the Yemeni people are strong enough not to accede to the opponents' demands.

Twenty nine months after unceasing air and ground campaign led by the Saudis, backed by the US and even the Israeli regime, the developments show that Saudi Arabia is immersing deep into the Yemen war quagmire, suffering a high economic price paid and damaged international prestige.

Initial Saudi plan was that the kingdom could seize control of the capital Sana’a within a week, but 29 months have passed and Yemenis are still standing resistant despite an all-out air, sea, and ground blockade. Saudi leaders have now backed down from their goals, seeking an exit from the Yemen swamp with their face saved. The country is even inclined to abandon its meddling in Syria and Lebanon and other regional countries in a bid to bring things in Yemeni under control. But experts are assertive in their idea that the regional conditions are never optimal for the Saudi desire to be met. With the latest win counted, the historical records document that Yemen defeated Saudi Arabia in seven various wars.

The global public opinion and international organizations' pressures are building on Saudi Arabia amid growing Yemeni civilian casualties. The aggression has so far left over 13,000 dead, some 50,000 wounded, and millions displaced. Additionally, 7 million Yemenis are presently suffering from malnutrition, and about 600,000 citizens are affected by cholera as the World Health Organization’s report says the water-born disease has killed over 2000 people, mostly children and women. The Saudi leaders are now facing growing duress from the world community as daily reports reveal darker aspects of their coalition’s crimes against the civilians and bombing of Yemen's economic structure and healthcare infrastructure with some human rights organizations suggesting some airstrikes has mounted to war crime.

All signs suggest that the Saudi leaders have made no gains but frustration in the war. Back-to-back failures and sticking in a costly and erosive war stripped Saudi Arabia of its traditional control over some Arab and Islamic countries. Riyadh fiasco comes while Syria has foiled the Saudi-American-Western camp's proxy war against Damascus.

Saudis seek diplomatic, face-saving withdrawal from the war. Ansarullah resistance along with Riyadh-backed terrorist groups' defeats prompted desperate attempts by the Saudi rulers to stretch hand towards the influential regional parties for help. The nonplussed kingdom seeks mediators to contribute to its thaw with Iran for stepping out of the dark-ended war. The reconciliatory plans so far played out in mediation efforts by regional parties such as Kuwait and Oman. The Chinese foreign ministry also offered mediation between the two countries. Iran stresses on regional crises settlement without foreign parties' intervention.

Signs show that a real defeat of Saudi Arabia in its war will unleash waves of crisis at home, strong enough even to oust the ruling dynasty.

Now they have not but two ways ahead. First, pressing ahead with war for deeper immersion in erosive combat and harder economic fallout. If Saudi Arabia chooses this path, it has to deal with impaired regional role and redrawn plan for balance of power in the Persian Gulf region. second,  giving in to a political solution and allowing Yemeni people to determine their own fate.

Certainly, Yemen’s Shiite Houthis that operate under Ansarullah political movement have a historical record of resistance and governing in the country, and will not allow Saudi Arabia along with its allies like the UAE and Bahrain and foreign backers such as the US and Britain to press the Yemenis for surrender. The invading parties at best will kill further civilians but are not expected to make gains valuable militarily and diplomatically.

Tags: Yemen Saudi
Short Link rasanews.ir/201oTW
Share
0
Please type in your comments in English.
The comments that contain insults or libel to individuals, ethnicities, or contradictions with the laws of the country and religious teachings will not be disclosed