Rasa - Human Rights Watch (HRW) has denounced the air raids conducted by Saudi Arabia and its allies in Yemen as “war crimes,” calling on the United Nations to launch an investigation into the fatal strikes. 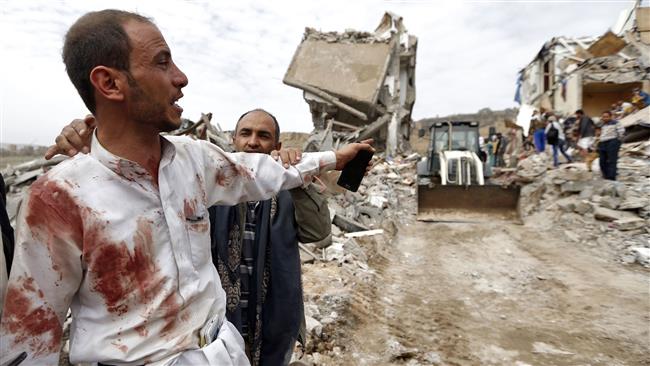 RNA - The rights organization cited on Tuesday five “apparently unlawful” Saudi aerial assaults in Yemen between June 9 and August 4, which killed 39 civilians, among them 26 children.

“The Saudi-led coalition’s repeated promises to conduct its airstrikes lawfully are not sparing Yemeni children from unlawful attacks,” said Sarah Leah Whitson, the Middle East director at HRW, adding that the attacks “are still wiping out entire families” in Yemen.

“These latest airstrikes and their horrible toll on children should galvanize the Human Rights Council to denounce and act to investigate war crimes, and ensure that those responsible are held to account,” she noted.

The period examined in the HRW report does not cover a deadly Saudi air raid on August 23 against a Sana’a hotel, which left some 60 civilians dead.

At least 14 Yemenis also lost their lives days later in similar Saudi strikes against the Faj Attan district on the outskirts of the capital.

Elsewhere in its statement, the HRW accused Saudi Arabia of failing to impartially probe violations in Yemen, blocking access to parts of the Arabian Peninsula country for international media and rights organizations, and continuing to undercut and undermine UN and other fact-finding efforts.

The UN, the rights group said, needs to immediately return Saudi Arabia to its annual “list of shame” for violations against children.

The report came only a day after Zeid Ra‘ad al-Hussein, the UN’s human rights chief, called for an urgent inquiry into Saudi airstrikes against civilians in Yemen.

Back in June, the world body blacklisted Riyadh after concluding in a report that the regime was responsible for many child deaths in Yemen.

A few days later, however, Saudi Arabia was removed from the blacklist, with then UN secretary general Ban Ki-moon acknowledging that he was forced to do so after the regime and its allies threatened to cut off funding to many UN programs.

Yemen has witnessed a deadly Saudi-led war since March 2015, which is meant to eliminate the Houthi Ansarullah movement and reinstall a former Riyadh-friendly regime.

The protracted Saudi war, which has been accompanied by a naval and aerial blockade on Yemen, has so far killed over 12,000 people and led to a humanitarian crisis and a cholera outbreak in the impoverished state.

Tags: Yemen Saudi
Short Link rasanews.ir/201oTF
Share
0
Please type in your comments in English.
The comments that contain insults or libel to individuals, ethnicities, or contradictions with the laws of the country and religious teachings will not be disclosed