Rasa - Iraq’s official High Commission for Human Rights has urged the Iraqi government to sue a US-led coalition operating in the Arab country over the death of civilians in the northern city of Mosul. 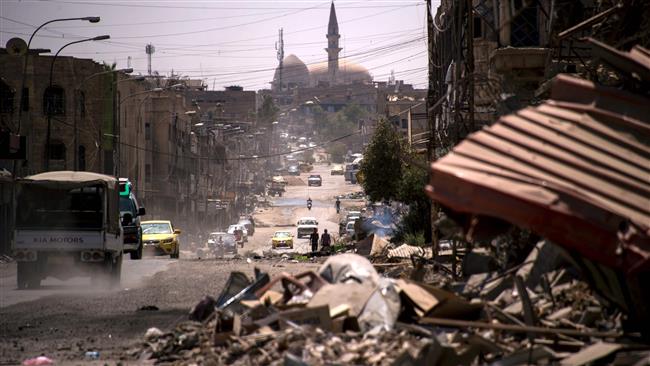 RNA - Wahda al-Jumaili, a member of the parliament-affiliated commission, said US-led airstrikes had destroyed “numerous buildings in western Mosul — residential and commercial,” and that “nearly 2,000 bodies” had been recovered from under the rubble.

She said that more bodies were expected to be found.

“We are therefore calling on Iraqi prosecution authorities to file an official lawsuit against coalition commanders for these violations of humanitarian law and a failure to discriminate between Daesh criminals and civilians,” she said.

Jumaili also urged Prime Minister Haider al-Abadi to launch an investigation “to determine who is responsible for the loss of innocent lives” in Mosul.

In July, Iraqi forces liberated the city of Mosul, the provincial capital of in Nineveh, from the control of the Takfiri Daesh terrorists.

Separately, Hussam Eddin al-Abbar, a member of the provincial council of Nineveh, said that the coalition’s fierce airstrikes had caused “widespread destruction” in the district of Old City in western Mosul in particular.

Health officials in Nineveh said on Monday that 2,650 bodies had been recovered from Mosul since the city’s liberation two months ago.

He said most of the bodies had been pulled from the rubble of destroyed buildings in the Old City district.

The United States and its allies launched a campaign of airstrikes against what they say are Daesh positions in August 2014 after the terrorist group overran parts of Iraq’s north and west, including Mosul.

The military alliance has repeatedly been accused of targeting and killing civilians. It has also been largely incapable of fulfilling its declared aim of destroying the Daesh Takfiri terrorist group.

Tags: DAESH Iraq
Short Link rasanews.ir/201oTA
Share
0
Please type in your comments in English.
The comments that contain insults or libel to individuals, ethnicities, or contradictions with the laws of the country and religious teachings will not be disclosed