Rasa - Israeli bulldozers have reportedly demolished several Muslim graves in addition to a wall at a cemetery in occupied Old City of Jerusalem al-Quds as the Tel Aviv regime goes ahead with its total disrespect for human and religious values. 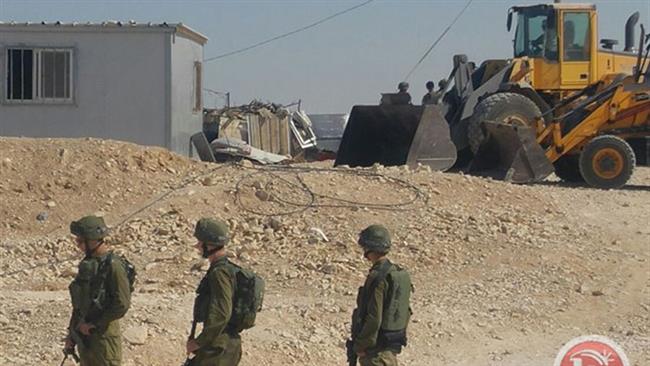 RNA - The head of the Committee for the Preservation of Islamic Cemeteries in Jerusalem al-Quds, Mustafa Abu Zahra, told Arabic-language Wafa news agency that Israeli bulldozers rolled into Martyrs’ Cemetery near the Lions' Gate to the al-Aqsa Mosque, tearing down a wall and destroying a number of graves there.

Abu Zahra noted that the cemetery contained the remains of 400 Palestinians, who were killed during the Six-Day War fought on June 5-10, 1967 between the Israeli regime, on the one side, and Egypt, Jordan, and Syria, on the other.

He explained that work had been suspended in the area, while his committee would take all necessary legal measures to prevent the desecration of the cemetery again.

There are reports that Israeli authorities are planning to seize parts of the cemetery for a national park trail.

Meanwhile, the Palestinian Authority spokesman, Tariq al-Rishmawi, has strongly condemned Israel’s desecration of Martyrs’ Cemetery, describing the move as a terrible crime against the Palestinian nation as well as all humanitarian principles and religious laws.

Rishmawi said in a press statement that this crime came as part of the Israeli regime’s land expropriation policies and Judaization plans for Jerusalem al-Quds.

He stressed that the Tel Aviv regime was violating all international resolutions on the Palestinian issue, the most recent of which was the United Nations Security Council Resolution 2334, which called on Israel to “immediately and completely cease all settlement activities in occupied Palestinian territories, including East Jerusalem” al-Quds.

Tags: Palestinian Israel
Short Link rasanews.ir/201oSy
Share
0
Please type in your comments in English.
The comments that contain insults or libel to individuals, ethnicities, or contradictions with the laws of the country and religious teachings will not be disclosed