Rasa – A Hezbollah field commander in Dayr al-Zawr referred to the key role of the coalition of Russia, Iran and Syria in defeating the Daesh siege on Dayr al-Zawr. 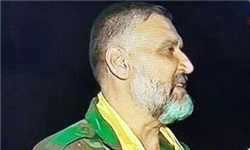 RNA – In an interview with the al-Mayadeen News Network, Haj Abu Mustafa, Hezbollah’s Field Commander in the Syrian city of Dayr al-Zawr, appeared for the first time on television to announce that Hezbollah’s forces had broken Daesh’s three-year-old siege on this city in eastern Syria.

He stressed that the defeat of the Daesh siege of Dayr al-Zawr and its military airport on September 5th was “a strategic victory in in every sense of the word.”

The Hezbollah commander stated that Hezbollah is an integral part of the “Islamic Resistance Axis” which extends from Islamic Republic of Iran to Iraq, Syria, Lebanon and even occupied Palestine.

He declared that the fighting in Dayr al-Zawr was a “devout school of sacrifice and heroism” and the reason for the victory achieved was due to the unity of all of the forces fighting in the city.

Abu Mustafa noted that the decision to be present on television was directly directed by Hezbollah’s Secretary-General, Sayyid Hasan Nasrallah.

He said he was besieged with Syrian forces at Dayr al-Zawr airport for more than eight months and added, “The defenders of Dayr al-Zawr were exposed to Daesh attacks but this terrorist group didn’t achieve any victory.”

The warrior stressed that those who were at Dayr al-Zawr Airport were successfully able to manage the crisis in all areas.

Abu Mustafa thanked the wise leadership of Syrian president Bashar al-Asad and the support from Tehran and Moscow in achieving this victory and noted, “If the coalition of Iran, Russia and Syria didn’t exist, this this victory wouldn’t have been achieved.”

He also appreciated the support of the people of Dayr al-Zawr in these operations.