Rasa - The Syrian Army troops and popular forces continued to drive ISIL out of more regions in Eastern Homs on Saturday in spite of the terrorist group's heavy suicide attacks on pro-government forces. 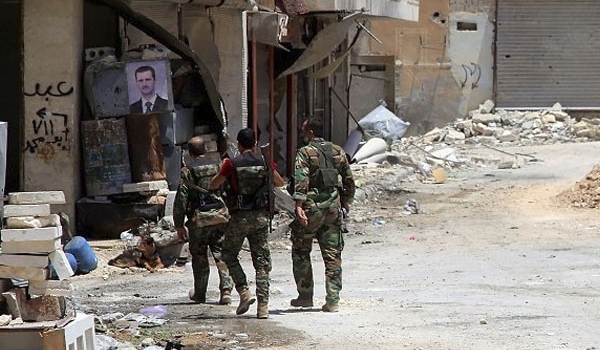 RNA - The Syrian Army and the National Defense Forces (NDF) recaptured more regions East of the highly-strategic crossroad town of Jubb al-Jarrah from ISIL who carried several suicide attacks on the government forces' strongholds in the battlefield.

In the meantime, the army men imposed control over the villages of Um Shaj and Khirbet al-Sab'ah in Eastern Homs after their victories against ISIL on Friday.

Reports said earlier today that the army men engaged in fierce clashes with ISIL Southeast of Jubb al–Jarrah and captured the villages of Abu Qatour, Abu Liyeh and Jubb Habal.

Over 20 ISIL terrorists were killed in several-hour long clashes with the army.

Furthermore, the army's artillery and missile units targeted ISIL militants as they were retreating from the newly secured towns and villages.

The army units also pushed ISIL back from the villages of al-Moshirfeh, Rasm al-Saba, Mazar al-Sayyad, Habra al-Sharqi East of Um al-Jom'ah Southeast of Jubb al-Jarrah, leaving over 25 terrorists dead and forcing their remaining pockets to retreat from the battlefield.

ISIL is experiencing a total military collapse in the face of the Syrian Army and popular forces at both the Northern (Eastern Hama) and Southern (North-central Homs) flanks of Central Syria.

Tags: Syria ISIL
Short Link rasanews.ir/201oSW
Share
0
Please type in your comments in English.
The comments that contain insults or libel to individuals, ethnicities, or contradictions with the laws of the country and religious teachings will not be disclosed