Rasa - Syrian army soldiers, backed by allied fighters from popular defense groups, have managed to break a nearly three-year siege imposed by Daesh Takfiri terrorists on a strategic airbase in the eastern city of Dayr al-Zawr as they continue to make substantial gains against the extremists. 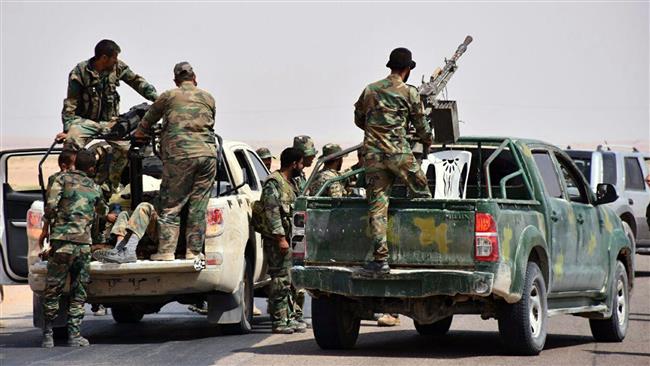 RNA - Syria’s official news agency SANA reported that the breach came after government forces and allies that were advancing from the Maqabir (Cemetery) district of the city, located 450 kilometers northeast of the capital Damascus, linked up with the soldiers holding the military site.

Syrian army troops and pro-government fighters had launched a new push on Friday towards the besieged military airport, as part of a multi-pronged offensive to retake the entire eastern city from Daesh Takfiris.

Earlier, Syrian soldiers and their allies established complete control over the town of Ash Sholah and the village of Tal Alloush.

At least 40 trucks carrying basic commodities such as fuel, food and medical supplies to civilians, in addition to two mobile clinics, arrived in Dayr al-Zawr on Thursday, only two days after Syrian army forces and fighters from popular defense groups reached the eastern city and breached the Daesh siege.

Daesh overran large parts of Dayr al-Zawr province, including its many oil fields, in mid-2014 as it seized swathes of land in Syria and neighboring Iraq.

By early 2015, the Takfiri terrorists were in control of some parts of Dayr al-Zawr city and besieged the remaining parts, which were under government control.

It is estimated that 100,000 people remain in the government-held parts of the city.

The so-called Syrian Observatory for Human Rights estimates that more than 10,000 people may be living in the Daesh-held parts of Dayr al-Zawr.

Tags: Dayr al-Zawr DAESH Syria
Short Link rasanews.ir/201oSR
Share
0
Please type in your comments in English.
The comments that contain insults or libel to individuals, ethnicities, or contradictions with the laws of the country and religious teachings will not be disclosed