Rasa - The United States is not likely to intervene to stop the ethnic cleansing campaign against Myanmar’s downtrodden Rohingya Muslims and is even drafting a bill to expand US military cooperation with the Southeast Asian country bordering China – a regional super power the US is trying to contain. 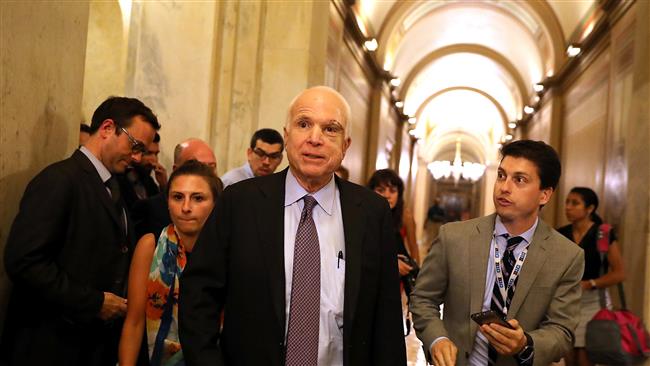 RNA - The US Senate will vote on a defense spending bill next week that could expand the Pentagon’s cooperation with the Myanmarese military, The Associated Press reported on Saturday.

A draft of the bill also allows for courses and workshops on issues like maritime security, peacekeeping and combating human trafficking, the report said.

Republican Senator John McCain, who chairs the Senate Armed Services Committee, refused to respond to questions about the bill.

The United States has been facing international condemnation due to its failure to censure Myanmar’s de facto ruler Aung San Suu Kyi over her complicity in the ethnic cleansing of Rohingya Muslims in the Muslim-majority Rakhine region.

Some analysts have noted that Washington does not want to strain ties with Myanmar’s government and influential military because of the country’s proximity to China which has given it the status of a knight in the geopolitical game.

According to experts, the US is pursuing the “Pivot to Asia” policy, which is essentially a strategy for containing China. For this, Washington is implementing a policy of engagement with Myanmar, while ignoring the regime’s violation of international law and human rights.

The Trump administration has reluctantly expressed concerns about the state-sponsored violence against the Rohingya but refused to address calls for international sanctions against Suu Kyi’s government. Washington although has expressed keenness in enhancing US-Myanmar military ties.

“Further normalization of the military-to-military relationship with Burma is the last thing we should be doing right now,” said Walter Lohman, Asia program director at the right-leaning Heritage Foundation. “What a terrible signal to be sending.”

Myanmar’s security forces and Buddhist militants have been carrying out atrocities against the Rohingya for several months. They particularly stepped the vicious campaign since August 25.

A large number of Muslims, including women and children, have been burnt alive, lynched to death or lost their lives while fleeing the ethnic cleansing of the Rohingya people. Entire villages of Rohingya Muslims have been burnt to the ground.

According to the United Nations, some 270,000 Rohingyas have fled from Myanmar into neighboring Bangladesh since August 25.

The US Holocaust Memorial Museum has said the destruction of homes and villages shows “an effort to ethnically cleanse the region of its Rohingya population and to prevent their eventual return.”

Refugees International has said Myanmar’s that military is blocking life-saving aid, “which we believe amount to ethnic cleansing and crimes against humanity.” The human right group has called for re-imposition of sanctions targeting Myanmar’s military officials.

More than a dozen Nobel laureates have written an open letter to the UN Security Council warning of a tragedy “amounting to ethnic cleansing and crimes against humanity” in Rakhine state, citing the “potential for genocide.”

Despite all this, America’s close ally in the Middle East, Israel, continues sale of weaponry to the Myanmarese junta.

Investigations by several rights watchdogs have found that more than 100 tanks, as well as boats and weapons, have been sold to Myanmar by Israeli arms companies.

Tags: US Myanmar
Short Link rasanews.ir/201oSI
Share
0
Please type in your comments in English.
The comments that contain insults or libel to individuals, ethnicities, or contradictions with the laws of the country and religious teachings will not be disclosed