US approves $3.8-billion arms sales to Bahrain amid its crackdown on dissent

Rasa - The US has reportedly approved arms sales worth over $3.8 billion to Bahrain as the ruling Al Khalifah regime continues its heavy-handed crackdown on dissent in the small Persian Gulf island country. 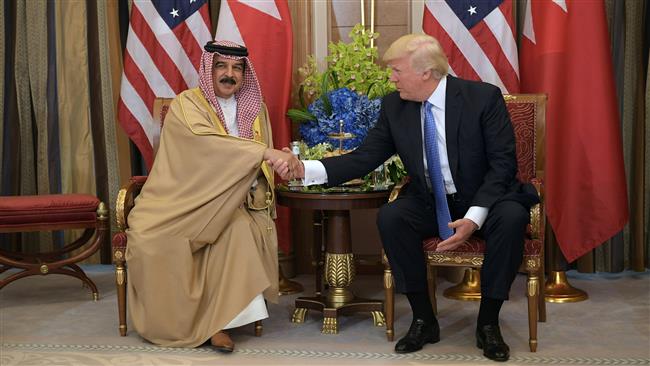 RNA - The package of the potential weapons deal, which includes F-16 fighter jets, upgrades, missiles and patrol boats, was approved by the US State Department, Reuters cited a US official, speaking on condition of anonymity, as saying on Friday.

The official added that the proposed arms sales included 19 F-16 warplanes, manufactured by the Lockheed Martin Corp, which could cost up to $2.7 billion. Back in March, the State Department informed Congress that it had planned to approve a request by Manama to purchase the fighter jets.

Furthermore, the State Department approved the sale of a pair of 35-meter patrol boats, equipped with machine guns, and 221 anti-tank missiles. According to the potential deal, Washington also demands $1.8 billion from Bahrain in exchange for upgrading the country’s existing fleet of F-16 jets.

Back in May, Trump said Washington’s relations with Manama were set to improve, after meeting with Bahraini King Hamad bin Isa Al Khalifah during a visit to Saudi Arabia.

They are demanding that the ruling Al Khalifah dynasty relinquish power and allow a just system representing all Bahrainis to be established.

Bahrain, currently home to the US Navy's 5th Fleet, has gone to great lengths to clamp down on any sign of dissent. On March 14, 2011, troops from Saudi Arabia and the United Arab Emirates were deployed to assist Bahrain in its crackdown.

Scores of people have lost their lives and hundreds of others sustained injuries or got arrested as a result of the Al Khalifah regime’s ruthless crackdown against domestic dissent.

Tags: US bahrain
Short Link rasanews.ir/201oSH
Share
0
Please type in your comments in English.
The comments that contain insults or libel to individuals, ethnicities, or contradictions with the laws of the country and religious teachings will not be disclosed