Rasa - The Syrian government has categorically dismissed a United Nations report accusing it of being involved in a suspected chemical attack in the country’s northwestern province of Idlib, which killed dozens of people in early April. 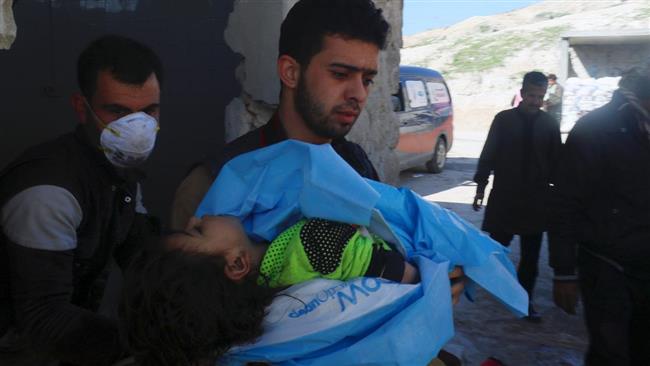 RNA - The Permanent Mission of the Syrian Arab Republic to the United Nations Office in Geneva, in a letter addressed to the Head of the United Nations Human Rights Council Joaquín Alexander Maza Martelli on Friday, refuted allegations by the UN Commission of Inquiry on Syria that government forces have used chemical weapons in Khan Shaykhun and elsewhere in the conflict-plagued Arab country, Syria’s official news agency SANA reported.

“The Syria government has not made use of toxic gases against its people, because it is not in possession of such munitions and Damascus views their application as a serious offence,” the letter pointed out.

The Syrian mission further criticized the “insistence of the UN Commission of Inquiry on Syria to involve itself in the case of chemical weapons and their use,” arguing that the commission’s action as a blatant departure from its mandate and that of the UN Human Rights Council.

“It is within the competence of fact-finding teams formed by the Organization for the Prohibition of Chemical Weapons (OPCW) to announce the final results after its ongoing investigations are over,” the letter read.

The Syrian mission also noted that the politicized and selective path taken by the UN Commission of Inquiry on Syria since its establishment and its links to certain parties and countries have lowered its status into a cheap propaganda apparatus, which tends to serve the agendas of these countries at the expense of the credibility of the Human Rights Council.

The UN Commission of Inquiry on Syria alleged on Wednesday that a Syrian Air Force fighter jet had dropped sarin on Khan Shaykhun on April 4, killing more than 80 civilians.

Using the incident as a pretext, US warships fired 59 Tomahawk cruise missiles from two warships in the Mediterranean Sea at the Shayrat airfield in Syria’s central province of Homs on April 7. US officials claimed that the suspected Khan Shaykhun gas attack had been launched from the military site.

Speaking in an exclusive interview with the Russian Sputnik news agency on April 21, Syrian President Bashar al-Assad described the chemical incident as “a false flag play just to justify the attack on the Shayrat base.”

He noted that the Syrian army launched an attack in Idlib Province on April 4 at 11:30 a.m. local time, while the suspected chemical incident is reported to have happened at 6:30 a.m.

“We did not launch any attack at that time,” Assad pointed out.

Assad cast doubt on the authenticity of the images and videos attributed to the scene of the suspected chemical incident in Khan Shaykhun.

“Even if you look at the pictures, you can see that the rescuers — presumable rescuers — were rescuing people without masks, without gloves, and they were moving freely. How? This is against all the specifications of the sarin gas that they talked about,” Assad said.

Tags: Syria Chemical
Short Link rasanews.ir/201oSA
Share
0
Please type in your comments in English.
The comments that contain insults or libel to individuals, ethnicities, or contradictions with the laws of the country and religious teachings will not be disclosed