Rasa - North Korea has warned that the US will “pay dearly” after Washington’s ambassador to the United Nations said the Asian peninsular country was “begging for war” as tensions continue to mount between the two countries. 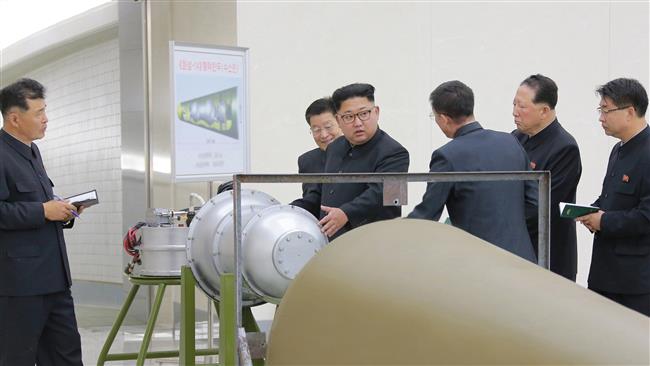 RNA - “The US administration will have to pay a dear price for her tongue-lashing,” a commentary by the official Korean Central News Agency (KCNA) said on Friday.

The KCNA further described Nikki Haley’s comments to the UN earlier this week as a “hysteric fit.”

The United Nations Security Council held an emergency session over North Korea on Monday, where Haley insisted that Pyongyang’s actions show it is “begging for war,” further calling for adoption of the harshest diplomatic measures against the North.

"Enough is enough. War is never something the United States wants. We don't want it now. But our country's patience is not unlimited," Haley said, adding, “We have kicked the can down the road long enough. There is no more road left.”

On Tuesday, North Korea warned the United States that Pyongyang is prepared to send “more gift packages” to Washington, two days after the peninsular Asian country sent shock waves across the world by detonating a hydrogen bomb, purportedly designed for a long-range missile.

“The US will receive more 'gift packages' from my country as long as it relies on reckless provocations and futile attempts to put pressure on the [Democratic People's Republic of Korea] DPRK,” Han Tae Song, the ambassador of North Korea to the United Nations in Geneva, Switzerland, said  while addressing the UN-sponsored Conference on Disarmament.

There has been an uproar over Pyongyang’s sixth and the biggest nuclear test to date, which was conducted on September 3. The bomb was also about three times more powerful than America's atomic bomb that destroyed Japan’s Hiroshima in 1945.

North Korean state television said on Sunday that, “The hydrogen bomb test was a perfect success,” adding that the device was capable of being loaded onto long-range missiles.

China, Russia and South Korea are among the countries that have voiced strong criticism of the North's last nuclear test. Washington has also censured Pyongyang, and US President Donald Trump has described North Korea as a “rogue nation,” which has become a “great threat and embarrassment” to China, North Korea's main ally.

North Korea is under mounting pressure over its missile and military nuclear programs and has been subjected to an array of sanctions by the United Nations. However, Pyongyang says it needs to continue and develop the programs as a deterrent against hostility by the United States and its regional allies, including South Korea and Japan.

The nuclear and missile programs were in fact “an exercise of restraint and justified self-defense right" to counter “the ever-growing and decade-long US nuclear threat and hostile policy aimed at isolating my country,” Han said.

The United States and its allies do not rule out a military option against North Korea, but Russia and China warn that no military solution is available for resolving the escalating crisis, saying the current standoff will only be resolved through dialogue.

Tensions on the Korean Peninsula have heightened since Washington recently engineered tougher sanctions in the Security Council over the North’s testing of two intercontinental ballistic missiles (ICBM).

On Monday, the South Korean military said the North was preparing for another missile launch, possibly an ICBM test, a few hours after Seoul conducted a live-fire ballistic missile exercise, simulating an attack on the North’s main nuclear site.

Tags: Korea US
Short Link rasanews.ir/201oS4
Share
0
Please type in your comments in English.
The comments that contain insults or libel to individuals, ethnicities, or contradictions with the laws of the country and religious teachings will not be disclosed