Rasa - Iranian Foreign Minister Mohammad Javad Zarif has warned about the continuation of the ongoing crackdown on Rohingya Muslims in Myanmar, urging the international community and the United Nations in particular to take swift action to end the crisis. 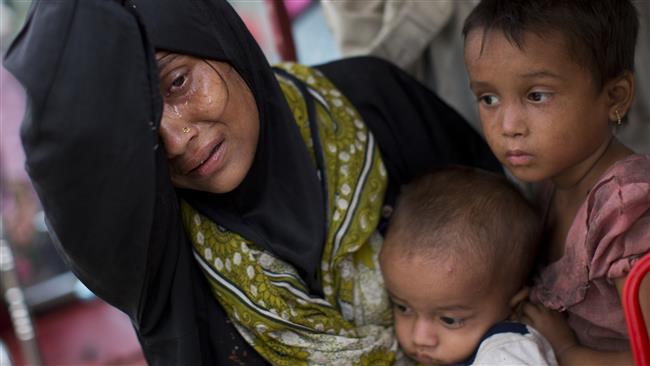 RNA - “It is expected that the United Nations act swiftly and undertake all necessary measures towards addressing international concerns about the deteriorating situation in Myanmar,” Zarif said in a letter to UN Secretary General António Guterres published on Friday.

He added that UN support for deescalating the violence, ensuring the dispatch of humanitarian assistance to the people in need and finding a sustainable solution to the crisis is essential and the body must act immediately.

Myanmar's security forces have been attacking the Rohingya Muslims and torching their villages since October 2016 in a bid to push them out of the western state of Rakhine.

Prior to that, the Muslims were frequent targets of Buddhist mobs. Tens of thousands of Rohingya were driven from their homes in another wave of violence in 2012.

The UN refugee agency, UNHCR, confirmed Thursday that some 164,000 Rohingya Muslims had fled Myanmar’s Rakhine to seek refuge in camps in Bangladesh since the harsh crackdown against them.

The Rohingya have been subject to communal violence by extremist Buddhists for years, forcing large groups of Muslims to take perilous journeys and seek refuge in Bangladesh and other neighboring countries.

In the Friday letter, Zarif also said the recent “horrifying” news coming out of the region revealed the scope of the atrocities committed against this Muslim community.

He added that the systematic and indiscriminate attacks against Rohingya Muslims by some extremist elements and agents affiliated to security forces have resulted in the killing of many Muslims and exacerbated a history of discrimination, injustice and desperation in that country.

“Should the systematic and extensive violation of the basic human rights of the Rohingya Muslims be left unattended, it would encourage extremism and instigate violence even beyond the borders of Myanmar and become a destabilizing factor for the whole region,” the Iranian minister pointed out.

He said forcing people out of their homeland and displacing them in other countries would fail to solve this deep-rooted crisis.

He added that Myanmar’s government must address the long-standing grievances and the miserable situation of its Muslim community, observe their rights in an effective manner and recognize them as equal citizens while protecting them in the face of violence and discrimination.

“The international community and Muslim countries expect the government of Myanmar to put an immediate end to the ongoing violence against Rohingya Muslim community and allow unhindered access of humanitarian assistance to the violence-stricken regions,” Zarif said.

He also called on Myanmar’s government to bring those responsible for the atrocities to justice and adopt necessary measures to prevent their recurrence in the future.

It is disappointing that such minimum global demands have not been received a proper response yet, the top Iranian diplomat said.

“The Islamic Republic of Iran stands ready and willing to support all such efforts towards the achievement of a durable and peaceful solution to the crisis, ensuring full respect for the human rights, wellbeing and security of the Rohingya Muslim community in Myanmar,” Zarif added.

On Thursday, the Iranian foreign minister chided the international community for remaining silent on the violence directed toward Rohingya Muslims in Myanmar and called for swift action to end the genocide.

“The international community has no excuse to allow the genocide of Rohingya Muslims to continue in front of our eyes,” Zarif tweeted.

“Double standards are the most prevalent challenge that human rights advocacy faces today. Why silence before crimes against Rohingya Muslims?” Ebtekar said in a message posted on his Twitter account on Friday.

Her post was in response to Myanmar’s de facto leader, Aung San Suu Kyi, who claimed on Wednesday that “a huge iceberg of misinformation” was spreading about violence in western parts of the country.

Tags: Iran Rohingya Myanmar
Short Link rasanews.ir/201oS2
Share
0
Please type in your comments in English.
The comments that contain insults or libel to individuals, ethnicities, or contradictions with the laws of the country and religious teachings will not be disclosed