Rasa - Iraqi forces have reportedly found a mass grave in an area northwest of Tal Afar containing the bodies of at least 50 people who were slain by Daesh Takfiri terrorists as government forces, backed by volunteer fighters from the Popular Mobilization Units, were engaged in a multi-pronged operation to liberate the northern city from the extremists. 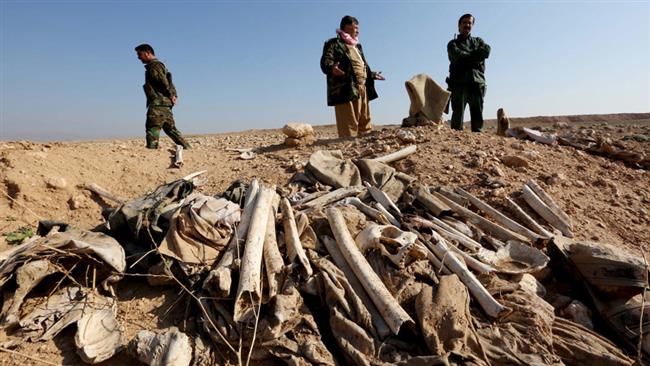 RNA - Major Shaker Ghaleb told Basnews news agency on Friday that soldiers from the 16th Division of the Army made the grisly discovery in al-‘Ayadiya district, which lies 11 kilometers northwest of Tal Afar, as they were clearing the area of last remnants of Daesh terrorists and explosive devices left behind by the Takfiris.

Ghaleb added that there were signs of torture on the bodies discovered, noting that the victims had apparently been shot in the head at point blank range. Some of the corpse are said to be missing limbs.

Military forces have begun transferring the remains of the victims to the forensic medicine department in Mosul to be identified by their relatives.

On August 31, Prime Minister Haider al-Abadi said the city of Tal Afar and the entire Nineveh province had been purged of the Daesh Takfiri terrorist group.

Meanwhile, the Daesh Takfiri terrorist group has reportedly executed a dozen civilians in Hawijah as army troops, backed by allied Kurdish forces, will soon launch a multi-pronged operation to liberate the town in the oil-rich northern province of Kirkuk from the militants.

A local source, speaking on condition of anonymity, told Arabic-language al-Sumaria television network that the execution was carried out at al-Bakkara military base.

The source, however, did not provide any information about the exact reason for the killings, nor the method by which the victims were put to death.

Separately, a high-ranking militant commander has been killed along with her husband and two sons as Iraqi Air Force fighter jets pounded a Daesh position in the northern outskirts of Hawijah.

An unnamed military official said the slain top Daesh figure was in charge of Daesh’s so-called women’s brigade in Hawijah.

Hawijah is one of four Iraqi towns still controlled by Daesh militants. The other three towns of al-Qa'im, located nearly 400 kilometers northwest of the capital Baghdad near the Syrian border, Anah and Rawa are in the western province of Anbar.

Daesh terrorists took control of Hawijah after capturing Mosul and several other Iraqi cities in mid-2014.

The Takfiris have frequently carried out mass executions in Hawijah. On August 6, 2016, they were said to have executed at least 100 people in one single incident.

The United Nations estimates that 85,000 civilians would flee Hawijah in the aftermath of the military operation to liberate the town from Daesh.

Tags: DAESH Iraq
Short Link rasanews.ir/201oS1
Share
0
Please type in your comments in English.
The comments that contain insults or libel to individuals, ethnicities, or contradictions with the laws of the country and religious teachings will not be disclosed