Rasa - Lebanon has held a state funeral for 10 of its soldiers captured and killed by Takfiri terrorists in the border area of Arsal between 2014 and 2017. 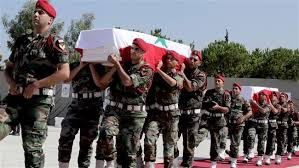 RNA - A large crowd of Lebanese people paid tribute to the bodies of the 10 soldiers at a Friday ceremony at the Defense Ministry near the capital city of Beirut.

Lebanon declared Friday a national day of mourning with government organizations, banks, schools and businesses closed as a sign of respect.

“Our joy in the victory over terrorism remains sorrowful for we were hoping that we manage to free you unharmed from the hands of the terrorism so that you may return to your Army and families in order to participate with us in this historic achievement,” President Aoun said during his speech at the funeral ceremony.

Daesh and other terror outfits broke into Lebanon in 2014, taking over the border town of Arsal. They were ousted from the town, but started taking positions close to Ras Baalbeck, another border town, which has been the focus of the recent counterterrorism operations.

The soldiers were kidnapped by Takfiri militants during the border raid in 2014. Two of them were killed the same year, while the fate of the remaining eight was unknown until late July when the militants agreed to reveal their burial place as part of a ceasefire deal with Lebanon and its Hezbollah resistance movement.

Under the deal, a convoy of Daesh militants and their families left areas on the Lebanon-Syria border.

The deal came after the Lebanese army, backed by Hezbollah, conducted successful military operations on the border areas.

Tags: Terrorist Lebanon
Short Link rasanews.ir/201oS0
Share
0
Please type in your comments in English.
The comments that contain insults or libel to individuals, ethnicities, or contradictions with the laws of the country and religious teachings will not be disclosed