Rasa - A Russian airstrike has killed around 40 Daesh terrorists, including four senior commanders, near Syria’s eastern city of Dayr al-Zawr. 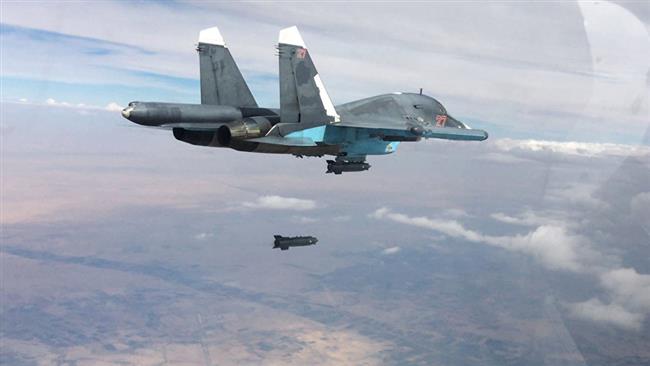 RNA - Russia’s Defense Ministry said Friday that the fatalities were caused by a single strike in the vicinity of Dayr al-Zawr, and that the commanders included Abu Muhammad al-Shimali, who headed the flow of foreign fighters into Syria and processed the terror group’s new recruits.

The militant leader was known as the “emir of Dayr al-Zawr.”

Gulmurod Khalimov, a native of Tajikistan known as the terrorist group’s minister of war, was also fatally wounded in the raid, the ministry added.

Russia’s warplanes dropped “bunker buster” bombs on the terrorists as they were meeting near Day al-Zawr to discuss how to respond to the advance of the Syrian army, Moscow said.

Backed up by Russian airpower, Syrian troops on Tuesday broke the nearly three-year-old Daesh siege over parts of Dayr al-Zawr.

The terrorist group has been moving its members as well as heavy weaponry to Dayr al-Zawr in the face of crushing defeats on different fronts across Syria as well as in neighboring Iraq.

Russia has been targeting the Daesh terrorists feeling from its former stronghold, Raqqah, to Day al-Zawr.

Back in August, the Russian air force eliminated more than 200 Takfiri militants on their way to the eastern Syrian city.

Daesh started a campaign of terror against Syria and Iraq in 2013 and 2014. Since two years ago, however, it has suffered debilitating blows at the hands of the national armies and their allied forces in the two countries.

Last Tuesday, the Russian Ministry had said the terrorists’ movement toward Dayr al-Zawr showed Daesh recognized “the fact that the staging area around Dayr al-Zawr is the last stronghold of the international terrorists on Syrian soil.”

Tags: DAESH Syria Russia
Short Link rasanews.ir/201oRv
Share
0
Please type in your comments in English.
The comments that contain insults or libel to individuals, ethnicities, or contradictions with the laws of the country and religious teachings will not be disclosed