Rasa - The latest estimates by the United Nations show a fresh bout of violence against the Rohingya minority Muslims that erupted in Myanmar two weeks ago has forced a record number of people to flee to neighboring Bangladesh. 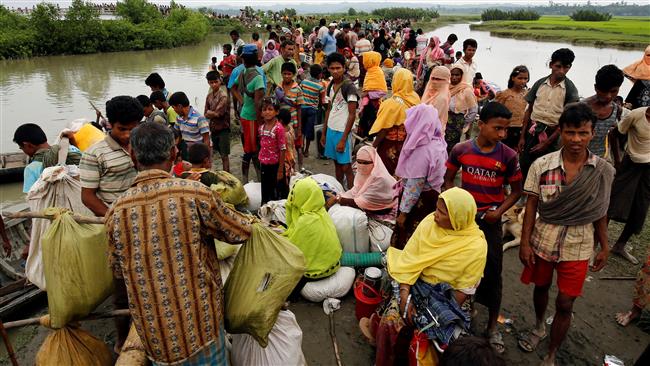 RNA - The UN refugee agency, UNHCR, confirmed Thursday that some 164,000 Rohingya Muslims had fled Myanmar’s western state of Rakhine to seek refuge in camps in Bangladesh since a harsh crackdown against them started on August 25.

Bangladesh has already hosted hundreds of thousands of Rohingya Muslims from Myanmar and the new influx has pushed refugee camps to the brink. Reports say many are currently squatting in open fields or muddy patches of land between the borders of Bangladesh and Myanmar.

The large-scale violence began two weeks ago when a group claiming to defend the Rohingya launched attacks on several border and police posts north of Rakhine, killing several officers. The army, backed by Buddhist mobs, then embarked on a massive “clearance operation,” which according to many eyewitnesses, has forced tens of thousands from their homes.

Journalists monitoring the developments in Rakhine reported new fires burning in Gawdu Zara village abandoned by the Rohingya on Thursday.

They said ripped pages of the Qur’an, the holy book of Muslims, could be seen everywhere on the ground in the village.

The account starkly differs from that of the government, which blames the militants claiming to defend the Rohingya for setting villages on fire.

Refugees who have made it into Bangladesh have also recounted the violence by Myanmar troops and Buddhist mobs, saying they set their homes ablaze, sprayed bullets indiscriminately and stabbed civilians. The refugees say they were ordered to abandon their homes or be killed.

Tags: Muslim Rohingya UN Myanmar
Short Link rasanews.ir/201oRh
Share
0
Please type in your comments in English.
The comments that contain insults or libel to individuals, ethnicities, or contradictions with the laws of the country and religious teachings will not be disclosed