Rasa - UN Special Envoy for Syria Staffan de Mistura has called on the Syrian opposition to accept that they have failed to win their war against the government of President Bashar al-Assad. 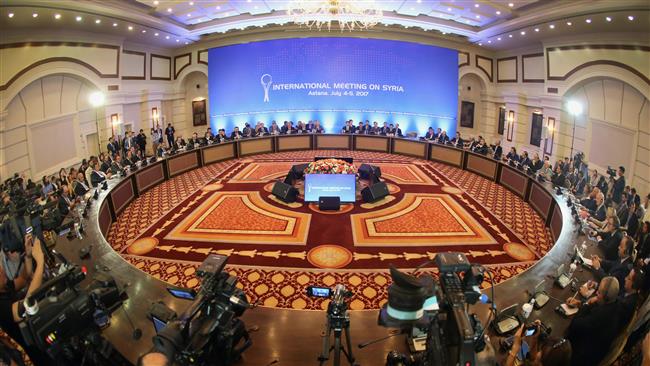 RNA - “For the opposition, the message is very clear: if they were planning to win the war, facts are proving that is not the case. So now it is time to win the peace,” de Mistura told reporters in Geneva on Wednesday.

The UN special envoy noted that the war was almost over, as many countries have concerted efforts to defeat Daesh Takfiri terrorists in Syria and a national ceasefire should follow soon after.

“Victory can only be if there is a sustainable political long-term solution. Otherwise instead of war, God forbid, we may see plenty of low intensity guerrilla (conflicts) going on for the next 10 years, and you will see no reconstruction, which is a very sad outcome of winning a war,” he added.

De Mistura plans to join the next round of negotiations between representatives from the Syrian government and foreign-sponsored armed opposition besides delegates from Iran, Russia, and Turkey as mediators in the Kazakh capital city of Astana between September 14 and 15.

He has sought to unify the opposition after hosting seven rounds of largely unsuccessful talks in Geneva.

The UN envoy underlined the need for resolving the fate of Idlib at the Astana talks, saying, “I am confident...there will be a non-conflictual solution – let us say not a new Aleppo, that is what we want to avoid at any cost, if we have learned from the past.”

He called for the formation of a political framework amid liberation of more areas from the control of terrorists groups, saying, “The issue is: is the government, after the liberation of Dayr al-Zawr and Raqqah, ready and prepared to genuinely negotiate and not simply announce victory, which we all know, and they know too, cannot be announced because it will not be sustainable without a political process?”

“Will the opposition be able to be unified and realistic enough to realize they did not win the war?” he further asked.

On Wednesday, Russian Foreign Minister Sergey Lavrov said that experts from Russia, Turkey and Iran have made considerable progress in efforts to agree methods of ensuring security in the de-escalation zone in Syria’s Idlib province.

“As for the Idlib province, contacts are underway between the guarantor countries and initiators of the Astana process - Russia, Iran and Turkey,” he said.

“In the course of [these consultations], we have made considerable progress to agree on the parameters, configuration and methods of ensuring security in the de-escalation zone in the Idlib province. I hope we will hear more specific news in the near future,” Lavrov noted.

Since January, Astana has hosted five rounds of peace talks which have so far resulted in an agreement on four de-escalation zones across Syria.

According to the Russian Foreign Ministry, three of the enclaves had been created to date, in the country’s sprawling central province of Homs, in the Eastern Ghouta area of the southern Rif Dimashq Province, and a southwestern militant-controlled stretch along the border with Jordan.

The upcoming talks aim to facilitate the creation of the fourth zone, in the western Syrian Idlib Province, where significant concentrations of Takfiri terrorists, most notably from al-Nusra Front, are operating. The successful materialization of that prospect is expected to give civilians an opportunity to return to peaceful life in Idlib.

The talks in Astana have been going on in tandem with UN-brokered Geneva talks.

When the first round of the Astana talks was organized, the Geneva talks had been stalled for months. The talks in the Kazakh capital then provided momentum for the UN-brokered talks, helping revive them.

Tags: UN Syria
Short Link rasanews.ir/201oRX
Share
0
Please type in your comments in English.
The comments that contain insults or libel to individuals, ethnicities, or contradictions with the laws of the country and religious teachings will not be disclosed