Rasa - Israel continues to sell weapons to Myanmar’s military junta despite the ongoing persecution of the Rohingya Muslim minority in the state of Rakhine. 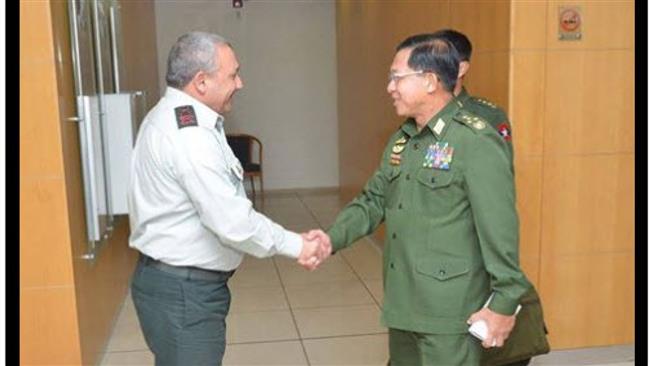 RNA - The arms sold to the junta reportedly include over 100 tanks and boats as well as other sorts of weapon.

Israeli arms companies such as TAR Ideal Concepts have also been involved in training Myanmar’s special forces, who are currently in Rakhine, where most of the violence against the Rohingya Muslims has taken place. Images posted on the company's website showed its staff instructing members of Myanmar’s forces on combat tactics and how to use specific weapons.

The Israeli High Court of Justice is expected to hear a petition launched by activists, urging the Tel Aviv regime to stop arms exports to Myanmar. Eitay Mack, an Israeli human rights lawyer presenting the petition, said, referring to Myanmar, “Israel has no control of what's happening with its weapons once it sends its weapons to Burma.” "But from TAR Ideal’s website, we know that they are arming and training Burmese special forces who are operating in the Rakhine state right now." The petition was submitted in January, following visits by Israeli authorities to Myanmar to discuss arms deals. Reacting to the petition, the Israeli ministry of military affairs in March said the court had no jurisdiction over the issue and claimed that arms sales to Myanmar were "clearly diplomatic."

The Israeli regime has shared a strong relationship with Myanmar and maintained trade ties over the years. In September 2015, one of the heads of the junta, General Min Aung Hlaing, visited Israel on a “shopping trip” of Israeli military manufacturers. His delegation met with President Reuven Rivlin as well as military officials, including the army’s chief of staff.

In the summer of 2015, Michel Ben-Baruch, the head of the Israeli ministry of military affairs' International Defense Cooperation Directorate, better known by its Hebrew acronym SIBAT, went to Myanmar. In the course of the visit, the heads of the junta disclosed that they had purchased Super Dvora patrol boats from Israel, and there was talk of additional purchases.

Penny Green, the director of the International State Crime Initiative at Queen Mary University, recently said many governments "have lent their support to the current genocide" in Myanmar. "It's not at all surprising that the latest escalation in Myanmar's genocide of the Rohingya has not moved Israel to cease its supply of weapons to Myanmar's military," said Green, an academic who has documented alleged war crimes against the Rohingya.

Commenting on the Israeli weapons sales to Myanmar, Green said Israel's "own record of violence and terror against the Palestinian people of Gaza is clear enough evidence" that Tel Aviv "is unmoved by ethical concerns and human rights."

Ofer Neiman, an Israeli human rights activist, said Israeli cabinets "have been selling arms to the military dictatorship in Burma for years."

"This policy is strongly related to Israel's oppression and dispossession of the Palestinian people. Weapons used against the Palestinians are being sold as 'field-tested' to some of the worst regimes on the planet."

The latest round of violence in Myanmar's western state of Rakhine has killed more than 400 people and triggered an exodus of the Rohingya to Bangladesh.

Tags: Israel Myanmar
Short Link rasanews.ir/201oRP
Share
0
Please type in your comments in English.
The comments that contain insults or libel to individuals, ethnicities, or contradictions with the laws of the country and religious teachings will not be disclosed