Rasa - At least five civilians have been killed when Saudi military aircraft carried out an airstrike against a residential area in Yemen as the Saudi regime presses ahead with an atrocious military campaign against its crisis-hit southern neighbor. 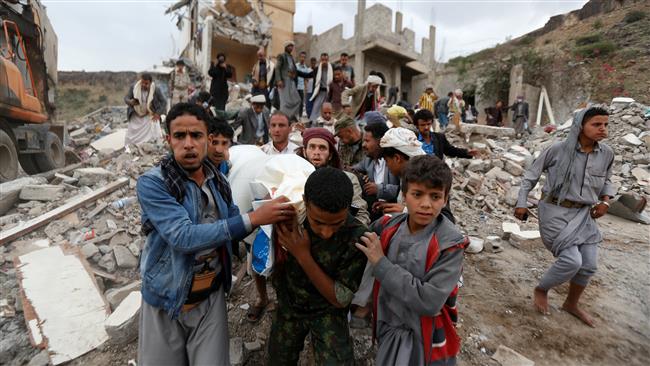 The source added that the airstrike also inflicted damage to adjacent buildings in the targeted area.

Later in the day, Yemeni army soldiers, backed by allied fighters from Popular Committees, thwarted an infiltration attempt by Saudi-sponsored mercenaries into Wadi al-Safra region in the south-central Yemeni province of Shabwah, killing 10 of them.

Saudi Arabia has been incessantly pounding Yemen since March 2015 in an attempt to crush the popular Houthi Ansarullah movement and reinstate the former president, Abd Rabbuh Mansur Hadi, who is a staunch ally of the Riyadh regime.

More than 12,000 people have been killed since the onset of the campaign more than two and a half years ago. Much of the Arabian Peninsula country's infrastructure, including hospitals, schools and factories, has been reduced to rubble due the war.

The United States and Britain have been providing the bulk of the military ordnance used by Saudi Arabia in the war. London has licensed 3.3 billion pounds worth of weapons since the beginning of the war.

Washington also sealed a multibillion-dollar arms deal with Riyadh when US President Donald Trump made his maiden visit abroad in May. The deal, which is worth $350 billion over 10 years with $110 billion to take effect immediately, was hailed by the White House as a significant expansion of the military relationship between the two countries.

Tags: Yemen Saudi
Short Link rasanews.ir/201oRN
Share
0
Please type in your comments in English.
The comments that contain insults or libel to individuals, ethnicities, or contradictions with the laws of the country and religious teachings will not be disclosed