Rasa - The UN Syria Commission released a report saying it is “gravely concerned” about the impact of international airstrikes in the war-torn country, adding that US-led forces failed to take proper precautions to protect civilians during an attack in Aleppo. 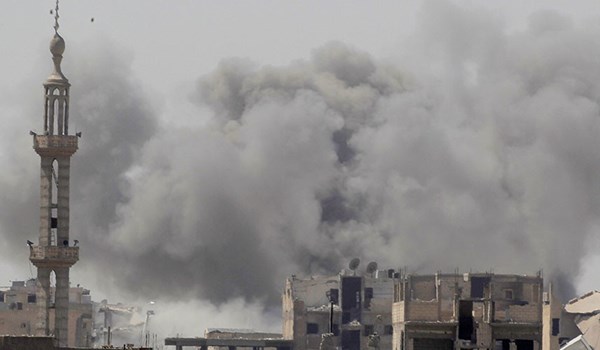 RNA - “The Commission is gravely concerned about the impact of international coalition airstrikes on civilians,” the report states, RT reported.

It goes on to cite the March 2017 incident in Al-Jinah, Aleppo, in which “forces of the United States of America failed to take all feasible precautions to protect civilians and civilian objects when attacking a mosque, in violation of international humanitarian law.”

It also mentions the situation in Raqqa, in which the “ongoing Syrian Democratic Forces and international coalition offensive to repel ISIL has displaced over 190,000 persons, and coalition airstrikes have reportedly resulted in significant numbers of civilians killed and injured.” It added that investigations are ongoing.

Raqqa, the last stronghold of ISIL is under “intense artillery shelling” and “limited airstrikes by the coalition forces,” Amnesty International stated last month.

Some 20,000 civilians are currently trapped in Raqqa, unable to escape from the terrorist stronghold, according to the UN, which urged the US-led coalition last month to stop the bombings to allow people to safely leave the city.

The trapped civilians have virtually no access to basic services, including safe water and food, and are surviving on food they stored up earlier, David Swanson, public information officer from the UN Office for the Coordination of Humanitarian Affairs, told RT.

The US-led coalition began an offensive in Raqqa in June, aiming to recapture the city. Hundreds of civilians have been killed and injured since that offensive began, according to Amnesty.

Tags: US Syria
Short Link rasanews.ir/201oRM
Share
0
Please type in your comments in English.
The comments that contain insults or libel to individuals, ethnicities, or contradictions with the laws of the country and religious teachings will not be disclosed