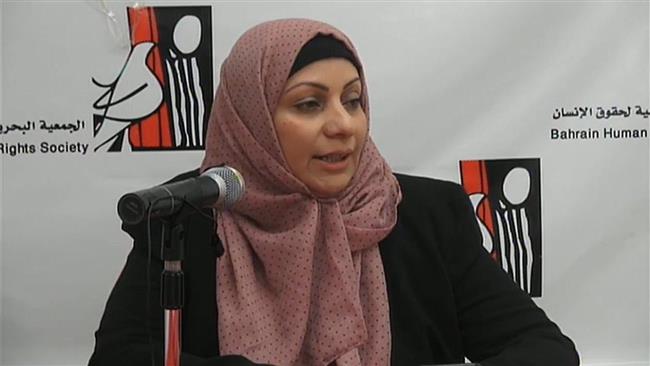 RNA - According to a Twitter account attributed to Nabeel Rajab, the chairman of the Bahrain Center for Human Rights, the pro-democracy campaigner had to be hospitalized after inmates at women's prison in the country’s north-central Isa Town suffered nausea and vomiting, Arabic-language Lualua television network reported.

Saegh, who works for the Salam for Democracy and Human Rights, was first arrested in May but was released later that month after being beaten and sexually assaulted by Bahraini regime forces.

The prominent human rights advocate went on an open-ended hunger strike on July 11 to express outrage at being tortured during interrogation at the notorious Criminal Investigation Building after her last arrest on July 3, and being denied the right to meet her family members or contact her lawyer.

Late last month, the Observatory for the Protection of Human Rights Defenders called on Manama to ensure the physical and psychological well-being of Saegh as well as Mohammed al-Shakhouri and Radhi al-Qatari.

The rights group called for the immediate and unconditional release of the trio, arguing that their continued detention was merely aimed at silencing voices speaking out against abuses in Bahrain.

It also urged the Al Khalifah regime to allow the jailed activists “unhindered access to their family, lawyers as well as proper medical treatment... and guarantee their right to due process and a fair trial.”

Rights group Americans for Democracy & Human Rights in Bahrain has enumerated a list of restrictive measures that the Al Khalifah regime has taken against Saegh.

In March, Bahrain’s parliament approved the trial of civilians at military tribunals in a measure blasted by human rights campaigners as being tantamount to imposition of an undeclared martial law countrywide.

Tags: Manama Human rights bahrain
Short Link rasanews.ir/201oRL
Share
0
Please type in your comments in English.
The comments that contain insults or libel to individuals, ethnicities, or contradictions with the laws of the country and religious teachings will not be disclosed