Rasa - At least five Rohingya Muslim children have drowned while on boats fleeing an escalation of violence in Myanmar, which has forced thousands of members of the persecuted minority to seek refuge across the border in neighboring Bangladesh. 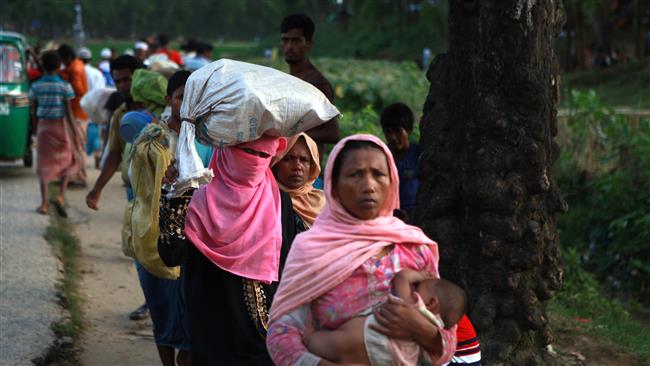 "So far, the bodies of five male and female children have been found at different locations," Border Guard Bangladesh officer Alyosius Sangma said.

Also on Wednesday, two government sources in Bangladesh told Reuters that Myanmar's forces had been “putting landmines in their territory along the barbed-wire fence” between a series of border pillars over the past three days.

The sources, who had direct knowledge of the situation, said Myanmar was probably putting the landmines to prevent the return of the Rohingya who have already fled to Bangladesh.

The latest eruption of violence in Myanmar's western state of Rakhine has killed more than 400 people and triggered an exodus of the Rohingya to Bangladesh.

According to the latest figures by the United Nations, nearly 125,000 refugees from Rakhine have fled to Bangladesh since violence escalated in late August, overwhelming existing camps for the displaced.

Human Rights Watch earlier said satellite imagery showed 700 buildings were burned in the Rohingya village of Chein Khar Li, just one of the 17 locations in Rakhine where the rights group has documented burning of homes and property.

Tags: Rohingya Myanmar
Short Link rasanews.ir/201oRJ
Share
0
Please type in your comments in English.
The comments that contain insults or libel to individuals, ethnicities, or contradictions with the laws of the country and religious teachings will not be disclosed