Rasa - The strategic importance of lifting ISIL's siege on Deir Ezzur city on Tuesday can play a crucial role in winning other battles against terrorists groups across the war-hit country, General Command of the Syrian Armed Forces underscored. 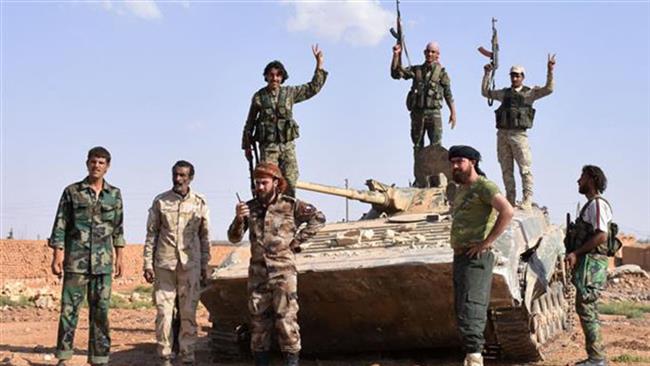 RNA -  "After a series of successful operations, units of our armed forces, in cooperation with the supporting and allied forces and backed by the Syrian and Russian warplanes, completed the second phase of their operations in the depth of the Syrian Badiyeh (desert), breaking the ISIL's siege on our people after more than three years in Deir Ezzur,” the Army Command said in a statement.

The Army Command added that hundreds of ISIL terrorists were killed or injured, while a large number of their sites, fortified positions and hundreds of vehicles were  destroyed in the operation.

The statement added that this achievement is also an important point for the expansion of military operations in the region to eliminate the remaining hotbeds of ISIL terrorists.

On Tuesday, the army troops entered the 137th Artillery Brigade Base in the Western outskirts of Deir Ezzur city, lifting the ISIL terrorists' siege of the city after approximately 1,100 days.

The army soldiers, backed up by the country's Air Force and Russian fighter jets, prevailed over the last strongholds of ISIL in the Western outskirts of Deir Ezzur city and reached positions of their comrades in the 137th Artillery Brigade Base, the sources said, adding that ISIL's siege of Deir Ezzur city has ended after more than three years.

The sources added that a number of the army forces and military vehicles entered the 137th Artillery Brigade Base via a newly-set corridor.

Tags: Terror Syria Russia ISIL
Short Link rasanews.ir/201oRI
Share
0
Please type in your comments in English.
The comments that contain insults or libel to individuals, ethnicities, or contradictions with the laws of the country and religious teachings will not be disclosed