Rasa - The United Nations Secretary-General Antonio Guterres warned of the risk of ethnic cleasing in Myanmar as he appealed to the country's authorities to end violence against Rohingya Muslims in Rakhine state. 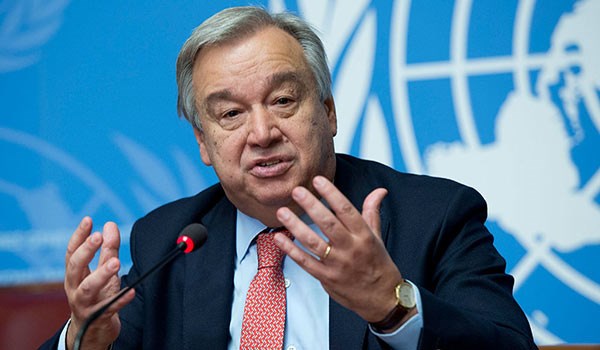 RNA - "The grievances and unresolved plight of the Rohingya have festered for far too long and are becoming an undeniable factor in regional destabilisation," Guterres told reporters at the UN headquarters in New York, Al-Jazeera reported.

"The authorities in Myanmar must take determined action to put an end to this vicious cycle of violence and to provide security and assistance to all those in need," he added.

Guterres also urged the Security Council to press for calm, sending the 15-member body a rare letter saying that "the international community has a responsibility to undertake concerted efforts to prevent further escalation of the crisis."

Nearly 125,000 Rohingya refugees - mostly women and children - have crossed the border to Bangladesh in the past 10 days, fleeing a security sweep by Myanmar forces who have been torching villages.

The bloody military crackdown, along with a blockade on Rakhine State, has left thousands of people stranded without essential life-saving supplies in the conflict area.

Government forces in Myanmar beheaded and burned alive Rohingya Muslim civilians, including children, witnesses disclosed, as calls grow to stop the “genocide” against the minority Muslims living in the Buddhist-majority country.

Myanmar’s military intensified attacks on Rohingya Muslims on August 25, after dozens of police and border outposts in the northern state of Rakhine came under attack by an armed group, which is said to be defending the rights of the Rohingya.

The Myanmar government has announced that over 2,600 houses have been burned down over the past week in the Rohingya-majority areas of the country’s Northwest, which have been the scene of one of the deadliest outbreaks of violence against the persecuted Muslim community in decades.

“A total of 2,625 houses from Kotankauk, Myinlut and Kyikanpyin villages and two wards in Maungtaw were burned down,” the state-run Global New Light of Myanmar said on Saturday.

The Rohingya Muslims fleeing the violence to Bangladesh, however, insist that a campaign of arson and killings by the Myanmarese army aimed at forcing them out of the country is responsible for the carnage and destruction in the area.

Almost 400 people have been killed over the past week in Rohingya-majority Rakhine State, according to official figures.

The Rohingya are denied citizenship in Myanmar and considered as illegal immigrants, despite their roots that date back centuries. Bangladesh is also growing increasingly hostile to Rohingya Muslims, more than 400,000 of whom live in the impoverished South Asian country after fleeing Myanmar since the early 1990s.

Tags: Antonio Guterres United Nations Myanmar
Short Link rasanews.ir/201oR7
Share
0
Please type in your comments in English.
The comments that contain insults or libel to individuals, ethnicities, or contradictions with the laws of the country and religious teachings will not be disclosed