Rasa - The US-led coalition purportedly fighting the Daesh Takfiri terrorist group says the so-called Syrian Democratic Forces (SDF) have taken the historic old city of Raqqah and its ancient mosque as they press ahead with their offensive to fully recapture the city. 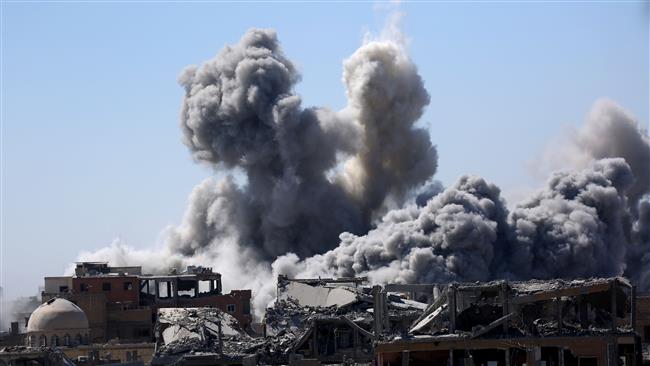 RNA - Army Colonel Ryan Dillon, a spokesman for the US-led coalition, said in a statement on Monday that the US-backed forces had cleared the Great Mosque of Raqqah, the oldest mosque of the city.

The statement also described the advance as “a milestone” in the Raqqah battle.

“The SDF have made consistent incremental gains in the urban terrain of the city, fighting block by block,” noted Dillon.

The SDF said last week said it had captured the final districts in Raqqah’s old city from the Daesh terrorist group.

The walled old city lies in the heart of Raqqah, but Daesh terrorists still control districts in the west of the city.

The SDF says it holds 65 percent of Raqqa in total.

SDF fighters have waged fierce battles with slow progress against Daesh in Raqqah’s old city since early July. The SDF pushed into the city in June after fighting for months to encircle it.

Thousands of people have fled Raqqah in recent months, and the United Nations Office for the Coordination of Humanitarian Affairs believes about 160,000 people still remain in the city.

The city of Raqqah, which lies on the northern bank of the Euphrates River, was overrun by Daesh in March 2013, and was proclaimed the center for most of the Takfiris’ administrative and control tasks the following year.

The SDF, made up of an alliance of Arab and Kurdish fighters, is supported by the US-led coalition with artillery and airstrikes.

In the past few months, Daesh has suffered multiple defeats across Syria, notably in the city of Raqqah. It has also been heavily battered in neighboring Iraq, particularly by losing its main Iraqi base of Mosul in July.

Syria has been fighting different foreign-sponsored militant and terrorist groups since March 2011. The Damascus government has repeatedly blamed certain countries for the spread of the devastating militancy.

Tags: US Syria
Short Link rasanews.ir/201oR2
Share
0
Please type in your comments in English.
The comments that contain insults or libel to individuals, ethnicities, or contradictions with the laws of the country and religious teachings will not be disclosed