Rasa - A surge in deadly violence in Myanmar has forced over 18,000 Rohingya Muslims to flee in less than one week. Muslim nations must take practical measures to end this inhuman crackdown. 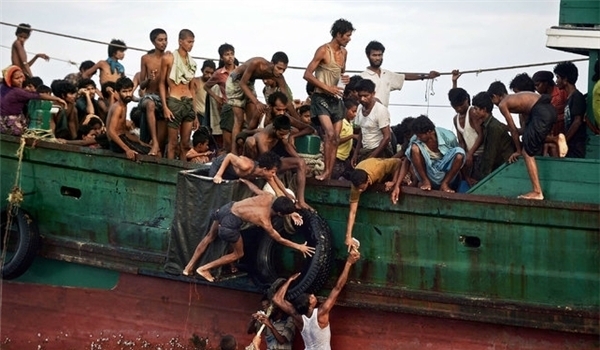 RNA - As maintained by Foreign Minister Mohammad Javad Zarif, Iran is prepared to help adoption of collective strategies by international organizations and Muslim countries in order to solve the ongoing crisis plaguing Myanmar’s Muslim community. This comes as Myanmar’s military has intensified attacks on Rohingya Muslims.

This is while the Muslim community has long been under a military siege in Rakhine since October 2016. The government claimed that its border guards had come under a militant attack and used it as the pretext to enforce the lockdown without substantiating its claim. The Rohingya had already been subject to communal violence by extremist Buddhists for years.

Myanmar’s military is committing atrocities and crimes against Rohingya people, who are considered by the UN as “the most persecuted minority group in the world.” According to a United Nations report published on Monday, a total of 87,000 Rohingya Muslims - including women and children, many with bullet wounds - have arrived in Bangladesh since last month. This is while the world community remains silent on the persisting violence.

Indeed, decades of persistent and systematic human rights violations, including the very violent security assaults since October 2016, and lack of international action have almost certainly contributed to the nurturing of violent Buddhist extremism. The Office of the High Commissioner for Human Rights says the attacks against desperate Rohingya civilians may “very likely” amount to crimes against humanity and ethnic cleansing.

Moreover, the government has long disputed the Rohingya people’s status as Burmese citizens and has restricted their movement and excluded them from social services, rendering the majority of the group stateless and impoverished. This violates their basic human rights under the International Humanitarian Law.

This further confirms that serious human rights violations are indeed being carried out against the civilian population and the world needs to do something about it. The world society cannot turn a blind eye to this disturbing situation. Sadly enough, in response to the violence, the UN Security Council has only held a closed door discussion, which is not enough. No formal statement has been made, while the right thing to do is to call on the Myanmar military to de-escalate immediately.

The world should also stop supporting Aung San Suu Kyi, Nobel Peace Prize laureate and Myanmar’s State Counselor. They shouldn’t look to her to set the right tone and to find the compromises and the de-escalation necessary in order to resolve the conflict for the good of all the people in Burma. If history is any indication, she will never bother to urge the government to revisit its citizenship law, grant freedom of movement for Rohingya Muslims, and invest in the socio-economic development of Rakhine. All she cares about is for the status quo to continue, which will only lead to further violence and radicalization which will further deepen chronic poverty in the state.

The principle of responsibility to protect is clear. Myanmar authorities must facilitate the work of humanitarian agencies and provide unfettered humanitarian access to help stabilize the situation and reduce the number of people trying to flee the country. Accusing international organizations of helping civilians that Myanmar calls “terrorists,” prompting fears for the safety of aid workers and continued violence will only serve to increase fears and the potential for further violence.

The Rohingya, stripped of their citizenship rights since 1983, have suffered egregious violation of human rights and are in dire need of immediate attention and assistance by the international community. Despite the government’s persistent denial of threats of genocide, ethnic cleansing and crimes against humanity, evidence available strongly indicates that the prospect of atrocity is high and the government has failed in its duty to protect the Muslim population, a duty it has acknowledged and accepted in the World Summit 2005 and in the General Assembly Interactive Dialogue in 2009. Even worse, the country's government is no shy of conducting genocide.

Democracy without human rights is meaningless. The Rohingya have been subjected to discriminatory treatments by the previous military reign and the situation does not seem to improve with the current quasi-military democratic administration led by Suu Kyi. Due to their failure and lack of capacity, the responsibility to protect the Rohingya falls on the international community to force the government to fulfill such duty to stop genocide. It is crucial that the UN reacts on the issue and applies pressure on the government, including adoption of sanctions, to seriously treat its population in accordance with the standard of International Human Rights Law and send UN troops to the country if its government and military still shrug off responsibility.

Tags: Muslim Rohingya Myanmar
Short Link rasanews.ir/201oQq
Share
0
Please type in your comments in English.
The comments that contain insults or libel to individuals, ethnicities, or contradictions with the laws of the country and religious teachings will not be disclosed