Rasa - The UN Human Rights Office has lashed out at the global body’s Human Rights Council for neglecting its responsibility with regard to launching an investigation into the massive rights violations in Yemen. 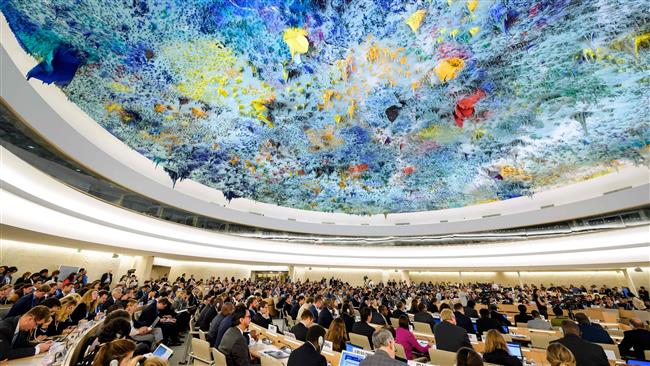 RNA - In a Tuesday report, the UN Human Rights Office urged the Human Rights Council to probe into atrocities committed during what it described as an "entirely man-made catastrophe" in its upcoming meeting this month.

"I ...join you in asking why the members of the Human Rights Council are not taking their responsibility and their membership to this body seriously," the office's chairman of Middle East and North Africa, Mohammad Ali Alnsour, told reporters.

Alnsour said this was the third time the Council was being asked to launch an investigation into the case.

Since March 2015, Yemen has been under heavy airstrikes by Saudi warplanes as part of a brutal war against the Arabian Peninsula country in an attempt to crush the popular Houthi Ansarullah movement and reinstall the former president, Abd Rabbuh Mansur Hadi, a staunch ally of Riyadh.

The Saudi-led coalition has also imposed a naval and aerial blockade on Yemen. There are no commercial flights and less than a dozen humanitarian flights are permitted to land in Sana’a and Aden each week.

Over the past two years, the 47-member Human Rights Council has shied away from launching an investigation into the deadly incidents in Yemen, leaving the responsibility to Yemen's National Commission, which reports to Hadi.

The report by the UN Human Rights Office warned that “political constraints” have been detrimentally affecting the so-called Yemen's National Commission.

"The perceived partiality of the National Commission and its limited access have prevented it from executing its mandate comprehensively," the report said.

"In addition... (it) appears to be lacking any instrument, or mandate, that would enable it to channel its findings into a credible accountability mechanism,” it added.

On Monday, the head of the UN World Food Programme said Saudi Arabia should fund the entire humanitarian aid budget for Yemen, or end the war, or both.

More than 12,000 people have been killed since the onset of the campaign, and much of the country's infrastructure, including hospitals, schools and factories, has been ravaged. The Saudi war has also triggered a deadly cholera epidemic across Yemen, dragging the impoverished nation to the brink of a widespread famine.

According to data provided by the World Health Organization (WHO) and Yemen’s Health Ministry on Tuesday, the country’s cholera outbreak, the worst on record in terms of its rapid spread, has infected 612,703 people and killed 2,048 since it began in April, with some districts still reporting sharp rises in new cases.

This is while, the WHO’s worst-case scenario had been 300,000 cases within six months when the outbreak started.

Tags: Yemen UN Saudi
Short Link rasanews.ir/201oQo
Share
0
Please type in your comments in English.
The comments that contain insults or libel to individuals, ethnicities, or contradictions with the laws of the country and religious teachings will not be disclosed