Calls for Iran naval coordination with US laughable

Rasa - The chairman of the Chiefs of Staff of the Iranian Armed Forces has described as “laughable” calls by the United States that Iran coordinate its naval activities in the Persian Gulf with American forces there. 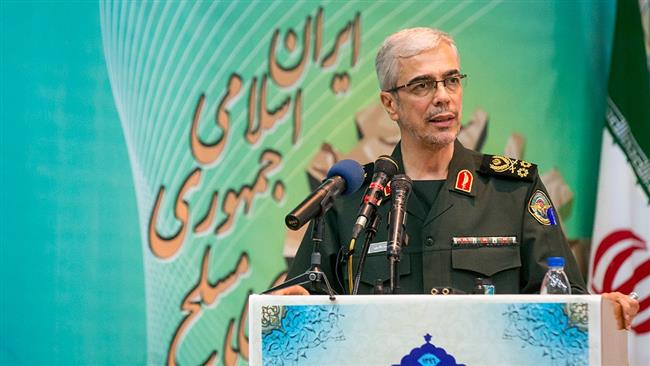 RNA - Major General Mohammad Baqeri said on Tuesday that arrogant powers had recently made a hype over Iranian vessels sailing to some one hundred meters of US warships in the Persian Gulf waters.

Based on coastal rules, he said, Iran has rights over territory in the Persian Gulf and will defend its interests there.

“Unfortunately, a country from the other side of the world… assumes special rights [for itself] in the Persian Gulf and says ‘Iran should coordinate with us if it wants to approach us,’ which is precisely [an instance of] excessive demand,” Major General Baqeri said.

The top Iranian commander suggested that the foreign forces in the region would take no responsibility to safeguard Iranian interests and should expect no coordination from Iran, either.

He said Iran coordinates its activities regarding aerial borders with the International Civil Aviation Organization (ICAO), adding the air defense would immediately issue warnings if an aircraft violates the country’s airspace.

Major General Baqeri said arrogant powers also raised a hue and cry about Iranian warnings to intruding American aircraft. He said that was the least they had to expect. “Let enemies know that a warning to an intruding aircraft is Iran’s smallest warning.”

US officials sometimes claim that Iranian naval forces initiate “unsafe” or “unprofessional” encounters with American forces in the waters of the Persian Gulf. Iran’s Islamic Revolution Guards Corps (IRGC), however, says its forces conduct regular patrolling missions in the Persian Gulf and do nothing unprofessional.

Tags: US Iran Iran
Short Link rasanews.ir/201oQm
Share
0
Please type in your comments in English.
The comments that contain insults or libel to individuals, ethnicities, or contradictions with the laws of the country and religious teachings will not be disclosed