Rasa - Peace cannot be kept by force; it can only be achieved by understanding. Understanding is the first step to acceptance, and only with acceptance can there be peace in Syria. 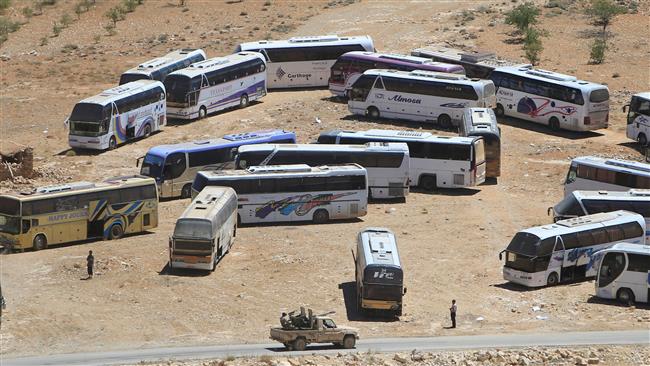 RNA - Just because the United States doesn’t understand it doesn't mean it isn't so. The manner in which the people of Syria have been treated by the Americans has exceeded all our expectations. Consider this:

Last week, and on humanitarian grounds, the Syrian Army agreed to a deal that allows the transfer of ISIL militants from Western Qalamoun region into eastern Syria. The problem is, the US is hampering the evacuation deal with the ISIL terrorist group. According to a statement released by the Lebanese Hezbollah resistance movement, US-led forces have left stranded most of the convoy’s 17 buses in the Syrian desert by destroying the road to Deir Ezzur. They are also preventing anyone from reaching them even to provide humanitarian assistance to families, the sick and wounded, and the elderly.

It is obvious that the US is trying to hamper the evacuation deal. The US move to impose an aerial blockade on buses carrying women and children as part of a deal between Hezbollah and ISIL is intended to undermine the latest military achievements by the resistance movement along the Syrian-Lebanese border. The whole idea is to negatively impact the victory of the Lebanese government and the resistance over the terrorist group. Nor is that all:

-There is a fundamental difference between fighting the terrorist group and killing innocent people. The blockade has no military value and violates International Humanitarian Law. If not removed, it could inevitably turn into a humanitarian disaster.

-The United Nations should intervene and save lives before it gets too late. The deal is not about purging ISIL from Qalamoun and transferring its militants close to the Iraqi border. Nor is it about giving them a breather. Hezbollah launched a major push on July 21 to clear both sides of Lebanon's border with Syria of armed terrorists. Moreover, the terrorist group is disintegrating rapidly and there is nothing its foreign backers can do to save it.

-The US is desperate to save its terror proxies and keep the conflict going. Trying to save its proxies from total collapse, the US has engineered the ongoing blockade. It wants to give the impression that ISIL’s shocking defeat along the Syrian-Lebanese border was due to internal divisions within the group, rather than the superiority of Hezbollah forces and Syrian government troops.

-The Americans believe they can still salvage ISIL and other groups, which will be easier said than done. The undisputed victory of allied forces is raising red flags in Washington. The US is left with very few options to support in Syria anymore, excluding, that is, the Kurdish Syrian Democratic Forces. All groups championed as “moderate” have either been defeated by the allied forces or devoured by ISIL and Nusra Front.

-Even the Israelis are very worried about what happens to Syria, as it directly threatens their expansionist policies on the Golan Heights. They hope very much that a rebirth of “moderate” terror groups like Ahrar al-Sham can be engineered by helping the US to derail the ongoing evacuation deal. If that fails, they will have no option but to try and create a new proxy militia to advance their illicit interests - something that will be very hard with the allied forces of Iran, Syria, Russia and Hezbollah now controlling most of the ground and airspace in Syria.

Evidently, the warmongers are desperate and might take desperate measures in these desperate times. They might even go ahead and attack the ISIL buses, also carrying women and children. This should come as surprise to no one. For the month of July, the Pentagon regime found only 13 “credible” incidents across both Iraq and Syria, and a total of 61 civilians killed in US airstrikes. This is one of the highest figures admitted for a single month by US officials, despite being an obvious underestimation. Airwars, a UK-based NGO that offers more comprehensive documentation, notes scores of US airstrike incidents, and thousands killed in the strikes. After targeting buses carrying women and children, expect scores of deaths once again get revised dramatically downward to a mere fraction of the actual count.

To be sure, the US has set out since 2011 to prevent a peaceful solution to Syria’s war. If the US genuinely wanted an end to the terrible bloodshed they would be standing behind similar evacuation deals and encouraging the so-called ‘moderates’ to halt their campaign of terror and sign up to the political process.

Washington is hampering the evacuation deal because it is not interested in peace, only in the violent overthrow of Syrian government and its replacement by a proxy that will do its bidding. The result of this policy has been catastrophic for the people of Syria who watch as their country is destroyed before their very eyes. While promoting itself as the great peacemaker, it's the sober truth that no country has done more to stoke up the Syrian conflict and sabotage a peaceful solution to it in recent years than the US, with the hampering of the evacuation deal being only the latest example.

Tags: US Syria ISIL
Short Link rasanews.ir/201oQe
Share
0
Please type in your comments in English.
The comments that contain insults or libel to individuals, ethnicities, or contradictions with the laws of the country and religious teachings will not be disclosed