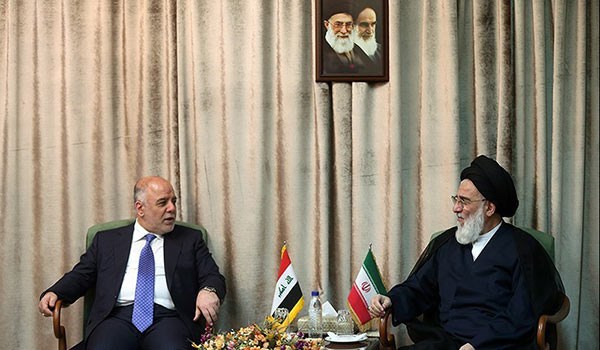 RNA - During the meeting in the Iraqi capital on Sunday, Hashemi Shahroudi and al-Abadi explored avenues for bolstering and reinvigorating mutual cooperation.

The chairman of Iran's Expediency Council and the Iraqi prime minister underlined the need for resolving the regional problems, including the Syrian crisis, through diplomatic means.

In a relevant development in mid-August, Iranian Interior Minister Abdolreza Rahmani Fazli and his Iraqi counterpart Qasim al-Araji in a meeting in Tehran signed a security agreement.

The agreement was signed between Rahmani Fazli and al-Araji to expand bilateral ties on boosting border security and control as well as safety of pilgrims.

The Iranian interior minister said that Tehran and Baghdad can increase their cooperation to fight terrorism and extremism in the region.

Tags: Hashemi Shahroudi Iran Iraq
Short Link rasanews.ir/201oQY
Share
0
Please type in your comments in English.
The comments that contain insults or libel to individuals, ethnicities, or contradictions with the laws of the country and religious teachings will not be disclosed