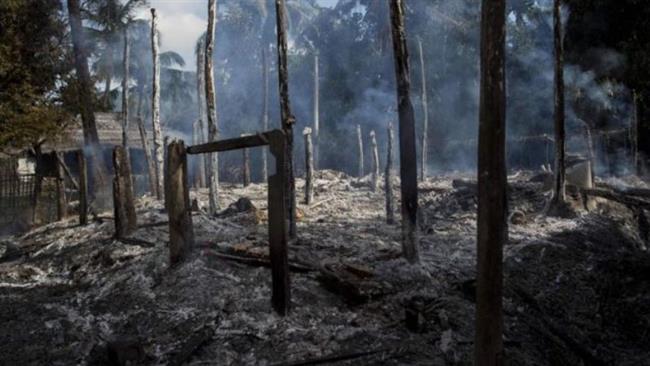 RNA - According to a United Nations report published on Monday, a total of 87,000 mostly Rohingya Muslims—including women and children, many with bullet wounds— have arrived in Bangladesh since last month.

Dozens of Rohingya refugees, suffering gunshot wounds, arrived in a hospital near Bangladesh’s southeastern border to get treated, AP reported, saying that the hospital was overcrowded with injured refugees.

Myanmar’s military intensified attacks on Rohingya Muslims on August 25, after dozens of police and border outposts in the northern state of Rakhine came under attack by an armed group, which is said to be defending the rights of the Rohingya.

The refugees, who have recently made it to Bangladesh, said military forces attacked, burned villages and shot civilians, forcing many thousands of people to take perilous boat journeys across the Naf River, which separates Myanmar from Bangladesh.

They witnessed “massacres” of civilians, whose villages were burnt by Myanmarese soldiers.

Bangladesh border guard commander Ariful Islam said earlier that at least 40 drowned in the river only this week.

Almost 400 people have been killed over the past week in Rohingya-majority Rakhine State, according to official figures.

The bloody military crackdown, along with a blockade on Rakhine State, has left thousands of people stranded without essential life-saving supplies in the conflict area, The Guardian reported on Monday.

The Myanmar government has blocked all United Nations aid agencies from delivering food, water and medicine to Rohingya Muslims.

Citing the office of the UN Resident Coordinator in Myanmar, The Guardian said the world body has suspended distribution of vital supplies in Rakhine State since August 25.

The deliveries are halted “because the security situation and government field-visit restrictions rendered us unable to distribute assistance,” it added.

The UN World Food Program (WFP) had also suspended vital supply distributions to other parts of the state, where at least a quarter of a million people are living without regular food access

Humanitarian organizations are “deeply concerned about the fate of thousands of people affected by the ongoing violence” in Rakhine, said Pierre Peron, spokesman for the UN Office for the Coordination of Humanitarian Affairs (OCHA) in Myanmar.

The Rohingya plight, meanwhile, brought several hundred Muslim women onto the streets of the Indonesian capital, Jakarta, as well as Bandung, the capital of West Java Province.

The protesters, who gathered outside the Myanmarese Embassy in Jakarta, were holding banners that read, “Unite the people to free Rohingya Muslims” and “Stop Muslim genocide in Myanmar!” and shouting, “Save Rohingya.”

“The world remains silent in the face of the massacre of Rohingya Muslims,” said Farida, an organizer of Monday’s protest who uses a single name.

The protesters were also calling for a cut in diplomatic ties with Myanmar.

Indonesians held a protest against Myanmar's government in Jakarta on the weekend. They set fire to a picture of Myanmar de facto leader, Aung San Suu Kyi. More rallies are also scheduled for this week.

“We will discuss in detail Indonesia’s proposal on how Indonesia can give humanitarian aid to Rakhine State,” Foreign Minister Retno Marsudi said in a video statement from the Myanmar city of Yangon on Monday.

She is also scheduled to visit Bangladesh in an attempt to urge authorities there to protect fleeing Rohingya Muslims.

Over 400,000 Rohingya refugees are already living in overcrowded, squalid camps and makeshift settlements in Bangladesh’s southern district of Cox’s Bazar.

Bangladesh has recently stopped thousands of Rohingyas on the border, saying it is no longer capable of hosting the refugees.

Late last month, it turned back a boat carrying dozens of refugees, including children and injured people.

Tags: Muslim Myanmar
Short Link rasanews.ir/201oQT
Share
0
Please type in your comments in English.
The comments that contain insults or libel to individuals, ethnicities, or contradictions with the laws of the country and religious teachings will not be disclosed