Young Palestinian succumbs to injuries after shot by Israeli forces

Rasa - A 21-year-old Palestinian has died of his wounds following an incident where he was shot and critically injured by Israeli military forces near a refugee camp in the southern occupied West Bank district of Bethlehem more than three weeks ago. 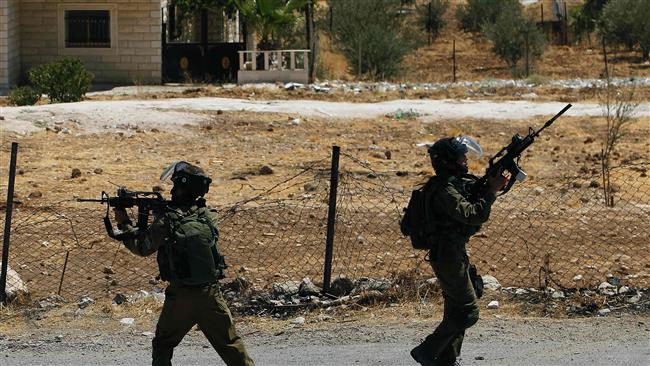 RNA - Issa Qaraqe, the head of the Palestinian Committee for Prisoners’ Affairs, confirmed on Sunday afternoon that Raed al-Salihi had succumbed to his wounds at an Israeli hospital, Maan news agency reported.

Qaraqe said he held the Tel Aviv regime responsible for the young man’s death. Salihi was shot in the liver during a predawn raid into Duheisha refugee camp on August 9. Another resident of the camp, Aziz Arafeh, was also shot in the leg. Salihi and Arafeh were both presumably unarmed when they were shot.

The two injured men were detained by Israeli forces and later taken to Israel's Hadassah hospital in Jerusalem al-Quds for treatment.

Salihi’s brother Bassam was also arrested by Israeli forces during a raid into the camp on August 16.

Shortly after the announcement of Salihi's death, mourners poured onto the streets and launched a protest march in Duheisha.

In July, 18-year-old Baraa Hamamda, a resident of Duheisha, succumbed to wounds sustained in his upper body after he was shot by Israeli forces during a raid into the camp.

Israeli raids in Palestinian towns, villages, and refugee camps are a daily occurrence in the occupied West Bank and East Jerusalem al-Quds.

Due to the typically aggressive nature of the Israeli raids, clashes often erupt. Local Palestinian youth throw stones and are met in response with live fire by Israeli forces.

Human rights groups have routinely condemned Israeli authorities for their use of excessive force against Palestinians.

According to Maan, Salihi was the 55th Palestinian to be killed by Israeli forces since the beginning of 2017.

More than 300 Palestinians have lost their lives at the hands of Israeli forces since October 2015.

The Tel Aviv regime has tried to change the demographic makeup of Jerusalem al-Quds over the past decades by constructing settlements, destroying historical sites and expelling the local Palestinian population.

Palestinians say the Israeli measures are aimed at paving the way for the Judaization of the city.

Tags: Palestinian Israel
Short Link rasanews.ir/201oQH
Share
0
Please type in your comments in English.
The comments that contain insults or libel to individuals, ethnicities, or contradictions with the laws of the country and religious teachings will not be disclosed