Rasa - Moscow Muslims gathered on Sunday in front of the Myanmar Embassy in solidarity with Rohingya Muslims who are being persecuted in the troubled Northwest of the country. 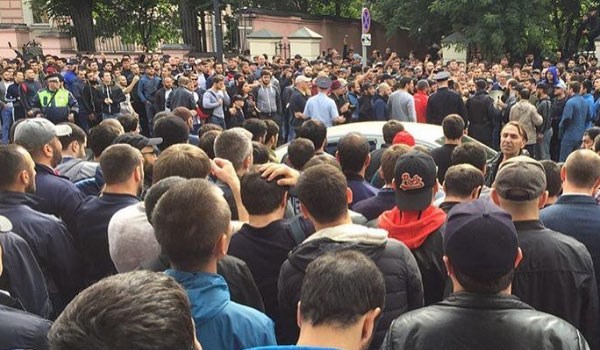 RNA - The rally took place in front of the Myanmar Embassy in the center of the Russian capital on Sunday, witnesses on social media wrote, RT reported.

Heavy police presence near the embassy is seen in the photos and videos.

People on social media claim that about a thousand activists took part in the rally. Some Instagram users shared posts with comments such as: “Stop genocide of Muslims.”

Chechen leader Ramzan Kadyrov took to Instagram Live to say that he is ready to organize a similar rally in the Chechen capital, Grozny on September 4. Muslims will perform prayer and pray for their brothers and sisters in Myanmar, the leader added.

The protest has not been approved by the Moscow authorities, Dozhd TV channel correspondent reported.

The situation in Myanmar, a small Southeast Asian nation, was aggravated earlier in August due to confrontation between Buddhists and Rohingya Muslims. Nearly 400 people were killed in clashes and military confrontations in the country in late August, Reuters reported.

Around 73,000 Rohingya have fled into neighboring Bangladesh since the violence erupted, Vivian Tan, regional spokeswoman for the UN refugee agency (UNHCR), told Reuters.

Tags: Rohingya Myanmar Moscow
Short Link rasanews.ir/201oQC
Share
0
Please type in your comments in English.
The comments that contain insults or libel to individuals, ethnicities, or contradictions with the laws of the country and religious teachings will not be disclosed