Rasa - Turkish President Recep Tayyip Erdogan accused Myanmar of '“genocide'” against Rohingya Muslims in the country's western Rakhine state after a crackdown by security foces last week forced 58,000 to flee their homes for neighbouring Bangladesh, according to UN estimates. 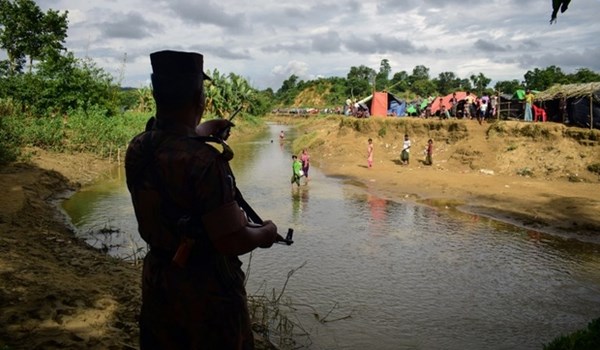 RNA - "There is a genocide there, Those who close their eyes to this genocide perpetuated under the cover of democracy are its collaborators," Erdogan said in a speech in Istanbul, Middle East Eye reported.

With the border between Myanmar and Bangladesh officially closed, Turkey's foreign minister also intervened to urge Bangladesh to "open your doors," adding that Turkey would meet the costs of accommodating more refugees.

"We have also mobilized the Organization of Islamic Cooperation. We will hold a summit regarding the Rakhine state this year. We need to find a decisive and permanent solution to this problem," said Mevlut Cavusoglu.

Erdogan is reported to have held phone calls with Muslim leaders for intensified efforts to solve the humanitarian crisis, while Cavusoglu also reportedly spoke with the former UN secretary-general and head of the Advisory Commission on Rakhine State Kofi Annan.

Myanmar authorities launched a crackdown last Friday after Rohingya insurgents allegedly attacked 20 police outposts and an army base, killing eight police officers and an immigration officer. According to the country's army chief, 370 Rohingya militants were killed in what Myanmar authorities described as a "clearance operation".

Rights group have said that security forces and vigilantes attacked and burned villages and have shot at civilians causing them to flee. Human Rights Watch (HRW) has released new satellite imagery from Myanmar which they claim shows that more than 700 homes have been razed in one Rohingya village.

Phil Robertson, Human Rights Watch's deputy Asia director, told the BBC: "As far as we can tell the destruction took place on the 25th August in the morning, and it appears to have been complete and total. Approximately 99% of the buildings are destroyed in that village."

Meanwhile, Bangladesh Prime Minister Sheikh Hasina has appeared relucant to add to the more than 400,000 Rohingya refugees Bangladesh, which shares religious ties with the Rohingya, has housed in refugee camps since large-scale violence erupted in 2015, and she urged the US to pressure Myanmar to halt the flow.

"We have given shelter to a huge number of Rohingya refugees in Bangladesh on humanitarian grounds, and it's a big problem for us ... So I call upon you to mount pressure on Myanmar in this regard," she said in a phone call with US Acting Assistant Secretary of State for South and Central Asian Affairs Alice Wells.

Myanmar has seen simmering tension between its Buddhist and Muslim populations since communal violence broke out in 2012.

After an operation by authorities last October, the UN documented brutal beatings, disappearances and the killing of infants and young children. Tens of thousands of Rohingya fled to Bangladesh at that time.

Tags: Muslim Turkey Rohingya Myanmar
Short Link rasanews.ir/201oQ7
Share
0
Please type in your comments in English.
The comments that contain insults or libel to individuals, ethnicities, or contradictions with the laws of the country and religious teachings will not be disclosed