Capable manpower can solve all problems

Rasa - Leader of the Islamic Revolution Ayatollah Seyyed Ali Khamenei says all existing problems in Iran can be overcome through taking advantage of capable manpower that abounds in the country. 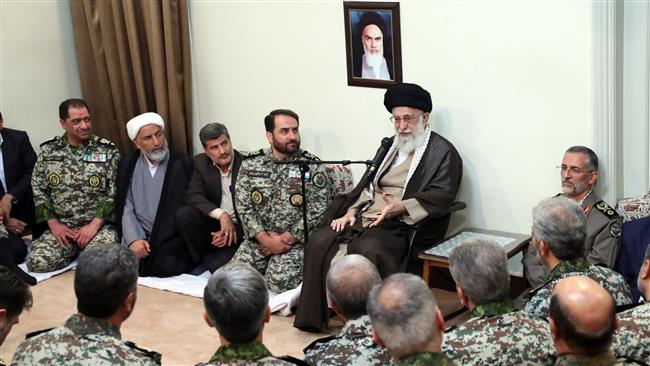 RNA - Ayatollah Khamenei made the remarks in a meeting with Brigadier General Farzad Esmaili, the commander of Iranian Army's Khatam al-Anbiya Air Defense Base and other senior commanders and officials of the base in Tehran on Sunday.

The Leader said capable manpower plays an unparalleled role in the progress of various sectors, including the Armed Forces.

Elsewhere in his remarks, Ayatollah Khamenei called for unrelenting efforts aimed at taking advantage of the country's talented manpower in order to overcome shortages and satisfy existing needs.

“Numerous advances in different sectors such as the Armed Forces as well as science and technology prove that the country's young and highly-motivated manpower is also capable and the children of Iran are cause of pride both inside the country and in scientific and technological centers of the world,” the Leader stated.

Ayatollah Khamenei lauded coordinated efforts made by the Iranian Army and the Islamic Revolution Guards Corps (IRGC) through the Khatam al-Anbiya Air Defense Base and also praised the base's cooperation with Iran’s Defense Ministry, universities and other scientific centers to overcome the existing shortages.

The Leader urged Khatam al-Anbiya Air Defense Base to continue its work at a higher pace and make the country self-sufficient by presenting new plans and initiatives.

Tags: Iran Ayatollah Khamenei
Short Link rasanews.ir/201oQ2
Share
0
Please type in your comments in English.
The comments that contain insults or libel to individuals, ethnicities, or contradictions with the laws of the country and religious teachings will not be disclosed