Iranian Commander: US Should Leave Region

Rasa - Iranian Armed Forces Deputy Chief of Staff for Coordination Brigadier General Ali Abdollahi blasted the US for supporting the terrorist groups and fomenting crisis in the Muslims states, and underlined the necessity for Washington to withdraw its military forces from the region. 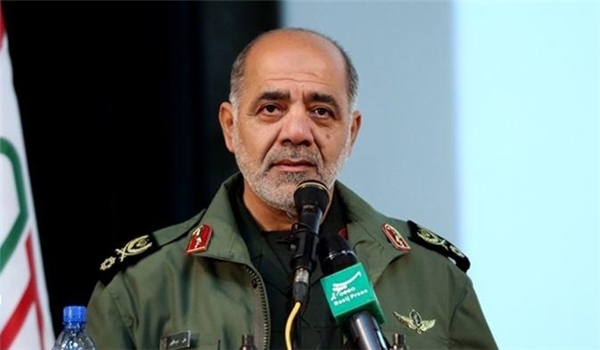 RNA - "The US should leave the region as soon as possible and it should stop warmongering, sowing discord among Muslims and supporting the terrorists," General Abdollahi said, addressing a ceremony in the Northern city of Rasht on Friday night.

Noting that the Americans have organized and equipped the terrorists and are still supporting them, he said that despite all their interferences in Syria, they have failed and the resistance front has gained repeated victories.

General Abdollahi underscored Commander of the Quds Force of the Islamic Revolution Guards Corps (IRGC) Major General Qassem Soleimani's important role in leading the resistance front against the terrorist groups and their supporters, and said, "The US has failed in any battlefield it has entered in the past few years."

In relevant remarks in 2016, Supreme Leader of the Islamic Revolution Ayatollah Seyed Ali Khamenei blasted the US military presence in the Persian Gulf region and interference in Iran's internal affairs, and said Tehran will powerfully continue its military drills in the region irrespective of Washington opposition.

"Today, the enemies utter words bigger than their mouths; for instance they develop plans to bring to a halt Iran's military wargames in the Persian Gulf, what a foolish remark," Ayatollah Khamenei said, addressing a large gathering of Iranian teachers and professors on the occasion of Teachers Day in Iran.

Warning that the Iranian nation has the needed capability to respond to the enemies' excessive demands, he said, "The Persian Gulf is the Iranian nation's home and the Persian Gulf and a large section of the Sea of Oman belong to this powerful nation; therefore, we should be present in the region, hold wargames and display our power and it is the Americans who should say why they have come from that side of the world and stage drills in here. What are you doing here? Go back to the Bay of Pigs. Go and hold exercises there. What are you doing in the Persian Gulf? The Persian Gulf is our home."

"The excessive demands of the powers should be confronted this way," Ayatollah Khamenei said.

Tags: US Iran
Short Link rasanews.ir/201oPp
Share
0
Please type in your comments in English.
The comments that contain insults or libel to individuals, ethnicities, or contradictions with the laws of the country and religious teachings will not be disclosed