US Attack on Palestinians at UN Is Dangerous 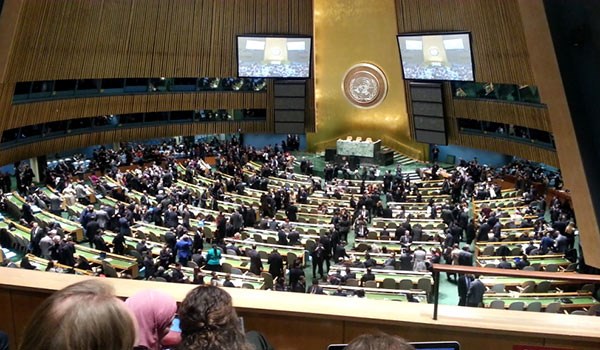 RNA - But then the usual happened; his proposal was shot down by US Ambassador Nikki Haley, purely because Fayyad was a Palestinian. Haley went even further down the road and indicated she would block any appointment of a Palestinian official to a senior role at the UN because Washington “does not recognize Palestine” as an independent state. This technically blacklists the Palestinians and declares them political outcasts, in a world body where some of them held key posts in a bygone era.

In most instances, Palestinians working at the UN have been nationals of member states, acquiring citizenships in countries such as UK, US, Canada, Kuwait, and Lebanon, among others. Guterres, who apparently relented to US pressure by stepping back on Fayyad’s appointment plucked up courage to tell reporters: “I believe that it is essential for everybody to understand that people serving the UN are serving in their personal capacities. They don’t represent a country or a government – they are citizens of the world representing the UN Charter and abiding by the UN Charter.”

Per usual, however, the US representative at the UN found time to continue her vendetta against the Palestinian people while Israel, a serial violator of the International Law the UN was created to uphold, is able not only to sit at the UN but to serve on key committees – right beside the Saudis and in places like the Human Rights Council, and suchlike.

On its face, and as per UN Charter, all member states, including the US, cannot and should not block Palestinians from their rightful place in the community of nations. The US administration would do better to push for an end to Israel’s occupation of Palestinian land and welcome a fully sovereign State of Palestine to the UN. The problem is, Israel is not used to being surprised, and normally the White House consults it before making any major move on the Middle East situation!

Meantime, the UN should criticize the US government for attacking Palestinians and express concern over the consequences of such action. It’s really quite amazing when you think that the UN, not only sort of a cornerstone of International Law but very much something that the US defended over the years, is now itself under attack from the US administration. It’s sort of a stunning turnaround. And ultimately the sequence is a dangerous one.

What this seemingly bold conclusion boils down to is that the US doesn’t want the UN to join the chorus of nations who want to recognize the Palestinians rights to freedom and self-determination. Instead of suggesting concrete measures to enforce previous and long-ignored UN resolutions, or to check Israel’s violations which made a Palestinian state impossible, the US simply wants the UN to fire its Palestinian staffs and to recognize an imaginary Palestinian state as a full member of the UN.

If we try to put a negative spin on it, we could say that the “two-state solution” is already dead. After all, one of the “two states” - Israel - has been expanding its territory through building illegal settlements on Palestinian lands and occupying other lands for all that time. This “success” means that there is nowhere left for a second state - much less jobs for Palestinians at the UN. The US, like many other Western states, finds it easy to violate Palestinian rights, but does not have the courage to demand a complete end to the Israeli occupation.

Having itself been such a key part of the failed peace process, the US now wants the UN to blacklist the Palestinians and declare them political outcasts, holding no key posts at the world body. Guess what? The UN will do just that and more. Given that all this is the case, the UN – under pressure by the US and company - will never move to enforce its own resolutions violated by Israel.

It is still not far-fetched for the UN to recognize the Palestinian state with Jerusalem al-Quds as its capital on the borders exactly as they were on 4 June 1967. That would signal an intent to reinforce existing International Law and bring an end to the illegal Zionist occupation which both the US and the EU have subsidized and politically covered for so long. Anything else would mark a new low in the UN’s abdication of its responsibilities. Unless and until the UN decides to end its unconditional support for Israel, there will be no hope for peace.

Tags: US UN Palestinian
Short Link rasanews.ir/201oPm
Share
0
Please type in your comments in English.
The comments that contain insults or libel to individuals, ethnicities, or contradictions with the laws of the country and religious teachings will not be disclosed