Rasa - Syrian government forces have carried out fresh operations against Daesh Takfiri terrorists across the violence-plagued Arab country, inflicting substantial losses on them. 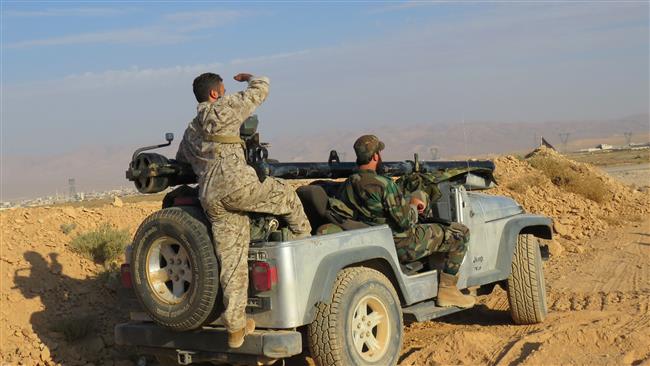 The source added that scores of Daesh extremists were killed or wounded during the military operations, and several vehicles equipped with machineguns were destroyed as well.

Syrian bomb disposal units are now combing the liberated areas for hidden ordnance and explosive devices, which Daesh Takfiris have planted there to slow down the advance of the army forces towards al- Uqayribat district.

Separately, Syrian army soldiers regained control over an area north of Mannnoukh village in the central province of Homs, inflicting heavy losses on the Daesh ranks and its military equipment.

Elsewhere in the eastern province of Dayr al-Zawr, Syrian and Russian fighter jets pounded the Daesh positions and fortifications, killing or wounding many of the terrorists.

Syria has been fighting different foreign-sponsored militant and terrorist groups since March 2011.

The Damascus government has repeatedly blamed certain foreign countries for the spread of the devastating militancy.

Tags: DAESH Terror Syria
Short Link rasanews.ir/201oPi
Share
0
Please type in your comments in English.
The comments that contain insults or libel to individuals, ethnicities, or contradictions with the laws of the country and religious teachings will not be disclosed