Over 2,600 homes burned in Rohingya-majority Rakhine

Rasa - The Myanmar government says over 2,600 houses have been burned down over the past week in the Rohingya-majority areas of the country’s northwest, which have been the scene of one of the deadliest outbreaks of violence against the persecuted Muslim community in decades. 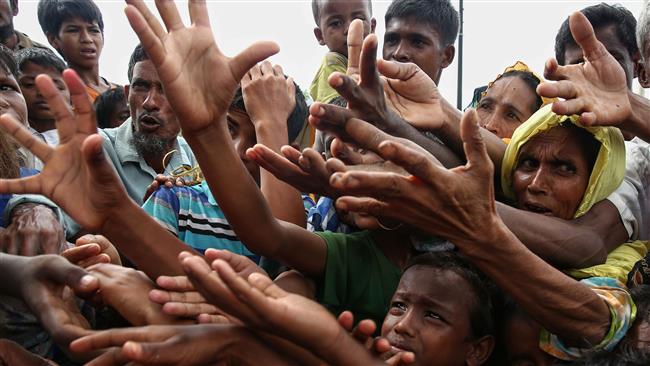 RNA - “A total of 2,625 houses from Kotankauk, Myinlut and Kyikanpyin villages and two wards in Maungtaw were burned down,” the state-run Global New Light of Myanmar said on Saturday.

The report blamed the so-called Arakan Rohingya Salvation Army (ARSA), which is said to be defending Rohingya Muslims, for the fires in Rakhine villages.

The Rohingya Muslims fleeing the violence to Bangladesh, however, insist that a campaign of arson and killings by the Myanmarese army aimed at forcing them out of the country is responsible for the carnage and destruction in the area.

“New satellite imagery shows the total destruction of a Muslim village, and prompts serious concerns that the level of devastation in northern Rakhine state may be far worse than originally thought,” said the organization’s Deputy Asia Director Phil Robertson.

Nearly 58,600 Rohingya Muslims have fled into neighboring Bangladesh from Myanmar, according to the UN refugee agency, as aid workers there struggle to cope.

The ARSA claimed responsibility for last week’s coordinated attacks on Myanmar army posts, which led to further clashes and a major clampdown by the country’s notorious military forces.

The skirmishes and ensuing army crackdown have killed at least 400 people and led to evacuation of more than 11,700 “ethnic residents” from the area, government officials said, referring to the non-Muslim population of northern Rakhine.

It marks a dramatic escalation of a conflict that has simmered since October, when similar but much smaller attacks on military posts prompted a brutal army response dogged by allegations of rights abuses.

Meanwhile, new arrivals in Bangladesh carrying their belongings in sacks were setting up crude shelters or trying to squeeze into available shelters or homes of local residents near the Naf river separating Myanmar and Bangladesh on Saturday.

“The existing camps are near full capacity and numbers are swelling fast. In the coming days there needs to be more space," said UNHCR regional spokeswoman Vivian Tan, emphasizing that more refugees were expected.

The Rohingya are denied citizenship in Myanmar and considered as illegal immigrants, despite their roots that date back centuries. Bangladesh is also growing increasingly hostile to Rohingya Muslims, more than 400,000 of whom live in the impoverished South Asian country after fleeing Myanmar since the early 1990s.

The development comes as the United Nations World Food Program (WFP) has suspended aid works in Myanmar’s Rakhine State amid the intensifying violence and a surging death toll among the Rohingya Muslim community.

“We are coordinating with the authorities to resume distributions for all affected communities as soon as possible, including for any people newly affected by the current unrest,” the WFP said in a Saturday statement.

The suspension of food assistance operations would affect 250,000 internally displaced and “other most vulnerable populations,” the statement added.

Aid agencies, including the WFP, are routinely accused of a pro-Rohingya bias by government officials.

The government has also accused WFP of allowing their rations to fall into the hands of Rohingya “fighters.”

The WFP has denied such allegations.

Tags: Muslim Rohingya Myanmar
Short Link rasanews.ir/201oPf
Share
0
Please type in your comments in English.
The comments that contain insults or libel to individuals, ethnicities, or contradictions with the laws of the country and religious teachings will not be disclosed