Why Is US Killing Entire Families in Syria Evacuation Program?

Rasa - According to US Central Command (Centcom), US warplanes have attacked a major east-west highway in Syria, to prevent a Red Crescent-led evacuation program which is taking ISIL fighters and civilians out of the Syria-Lebanon border area to Deir Ezzur under a ceasefire deal with Syrian government and Hezbollah. 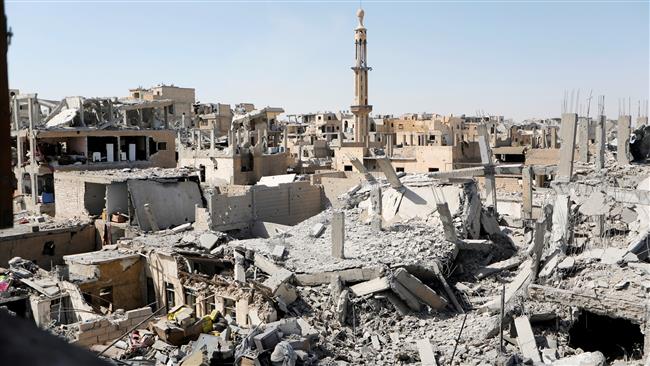 RNA - After ISIL lost all of its territory in the border region, they negotiated an evacuation deal with the allied forces involved. The US, however, insists that it is not a party to the deal, and feels justified attacking the highway to stop the convoy as a result. The buses are said to contain militants, their families and civilians. The US insists on all of them being killed instead of delivered to Deir Ezzur.

The convoy is now effectively stuck smack in the middle of Syria, with no easy way to move on to their intended destination. Centcom Spokesman Col. Ryan Dillon insists the convoy is still being monitored, and that the US would not rule out attacking the buses in the future if they believe it’s appropriate to do so. Dillon goes on to slam Russia, who appears wholly uninvolved with this whole evacuation process. He says the fact that Russia doesn’t actively prevent the convoy from leaving proves they aren’t serious about fighting ISIL. Actually. It’s the other way around:

- The War Party in Washington is not happy with the way things have turned out in its regime-change program in Syria. Its terror proxy forces were supposed to depose the government but now just want to get out of the conflict zones while they can – saving themselves and their unfortunate families.

- One way or another, peace will prevail. After that the world will find out how the US and company aided and abetted various terrorist groups in the war-ravaged country – when they talk to the cameras.  ISIL and other terror proxy forces have either been killed or surrendered territories. Their remaining fighters, along with families and civilians are now being evacuated into the Deir Ezzur province.

- For many reasons, US officials are expressing outrage at the deal, and indeed at the notion of any deal. This is not because as US Special Envoy Brett McGurk demands, “All of the ISIL fighters should be killed on the battlefield, and that busing is inappropriate for them.” The US wants them to stay and terrorize. This way they can continue the profitable war of attrition against Syria and its allies Iran, Russia and Hezbollah. It gives US perfect excuses to occupy Syria, bash Iran, and sell new weaponry to regional client states, mainly Saudi Arabia and the UAE.

- The weak can never forgive. Forgiveness is the attribute of those who have won the war. The allied forces of Iran, Syria, Russia and Hezbollah have won the war. The evacuation program is not intended to give a new breather to the terrorist groups. The whole idea is based on humanitarian grounds and giving them the chance to change course. There is still room in Syria for those who regret being part of a foreign-backed regime-change war. If they lay down arms and surrender, they and their families can have the chance to live in post-ISIL Syria.

Where this leaves the evacuation program is unclear, as the US seems to be holding out for the massacre of ISIL fighters, their families and civilians on the buses, and has threatened to attack the buses if they try to find a new route around the giant hole US warplanes have created in the highway they are traveling on. But one thing is certain:

The United States is killing entire families in Syria, and enabling Saudi Arabia to do the same in Yemen. In the first week of fighting in Raqqa, UN war crimes investigators warned that the US had already killed 300 civilians from air strikes alone. Rather than heed that warning, the US has continued the same strategy of pounding Raqqa into the ground despite the likelihood of civilian casualties. Not to mention that President Trump has relaxed the rules surrounding air strikes earlier this year, meaning military generals on the ground can call in airstrikes from the ground with zero oversight.

The result is that entire families, and not just ISIL families, are being massacred by US-led air strikes almost everywhere. The scale of things could increase significantly, if the War Party tries and derails the ongoing evacuation program. The program has come to the fore because America’s remaining terror proxies are not willing to fight to the death. There are very few die-hard ISIL supporters, and there are many witnesses and activists who have reported incidents of widespread civilian deaths at the hands of US air strikes.

This makes it incredibly difficult to believe that Washington is taking the utmost care to protect civilians in Syria. At a time when Amnesty International and human rights groups release evidence condemning the US for killing civilians in an indiscriminate fashion, are we just supposed to take their word for it?

As horrifying as the terror being inflicted on Syria is, what is occurring right now is not taking place in isolation. The US is delivering this disturbing criminality all over the region. In Yemen, the Saudi-led coalition, which is armed, trained, and protected by the US and the UK, is doing the exact same thing. These kinds of attacks seem to be occurring daily, and no target is off-limits for the war criminals - even their own terror proxies and entire families.

Tags: US Syria ISIL
Short Link rasanews.ir/201oPS
Share
0
Please type in your comments in English.
The comments that contain insults or libel to individuals, ethnicities, or contradictions with the laws of the country and religious teachings will not be disclosed