Rasa - Britain is set to send more troops to Iraq with the purported aim of fighting Daesh terrorists, who have already lost their major bastions in the Arab state in the face of successful Iraqi army operations. 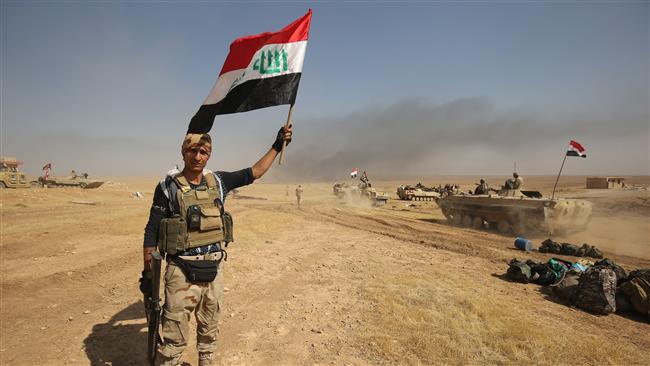 RNA - “We are stepping up our contribution to the fight against Daesh and fulfilling Britain’s role as a key player in the global coalition,” British Defense Secretary Michael Fallon said Thursday.

The contingent of 44 “expert troops” is to be deployed for six months at the Ain al-Asad airbase in Iraq’s western Anbar Province to purportedly build infrastructure, including accommodation and offices.

“These extra troops will help support operations to bring the defeat of Daesh a step closer,” said the UK defense chief.

This brings the number of British troops at the airbase to more than 300 and the total in Iraq to around 600. The Ain al-Asad airbase also houses hundreds of US advisers as well as Iraqi and Danish troops.

The Anbar Province cities of Ramadi and Fallujah were among the first to fall to Daesh, when the terror group first emerged in the Iraq and began its sweep across its northern and western parts in 2014.

Observers have raised questions about the timing of the British deployment as Iraqi government forces and allied forces have successfully been going after Daesh terrorists from town to town, pushing the terror group to the brink of fall in the country. They cite the West's failure to commit troops when Daesh was overrunning Syrian and Iraqi cities one after another.

In July, Iraq liberated the northern city of Mosul, which used to serve as the terrorist outfit’s main urban stronghold in the country, following a months-long offensive, described by an American general as “the toughest urban battle since World War II.”

In the latest victory on the battlefield, Iraq on Thursday declared that its forces had retaken the northern city of Tal Afar and the surrounding region of Nineveh.

Daesh currently controls barely 10 percent of the country, according to the US-led international coalition, which claims to be fighting the terror group in Iraq and neighboring Syria.

Iraqi forces are now going for Hawija, 300 kilometers (190 miles) north of the capital, Baghdad, as well as a few pockets of territory near the Syrian border.

The deployment of extra British troops also coincides with an upcoming referendum on the independence of Iraq’s autonomous Kurdish region.

The controversial referendum will be held on September 25 in the three Kurdish region provinces. It will also be held in areas of dispute between the Kurdish and Iraqi governments, which are currently under Kurdish military control.

The central government in Baghdad is opposed to the vote, while regional players like Iran and Turkey have also expressed concerns about the planned referendum, arguing it could create further instability in the region.

Tags: DAESH Iraq Britain
Short Link rasanews.ir/201oPK
Share
0
Please type in your comments in English.
The comments that contain insults or libel to individuals, ethnicities, or contradictions with the laws of the country and religious teachings will not be disclosed