Rasa - An Indian court has charged a minister and two senior leaders from the ruling Bharatiya Janata Party (BJP) with criminal conspiracy over the demolition of a historical mosque by Hindu extremists in 1992. 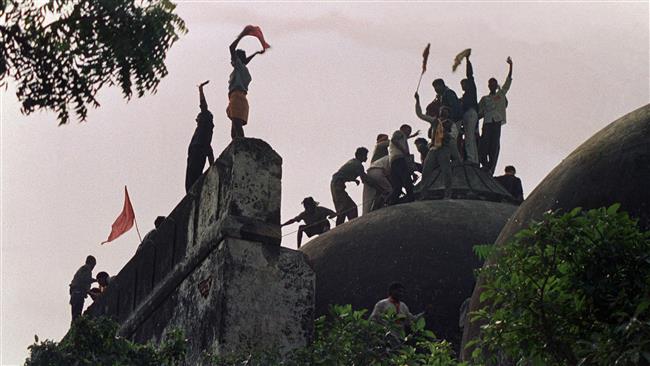 RNA - Resources Minister Uma Bharti, as well as former Deputy Prime Minister Lal Krishna Advani and M M Joshi were among 12 defendants present at the court in Lucknow, the capital city in the northern state of Uttar Pradesh, as the judge read out the charges against them.

"The Court has invoked an additional charge of criminal conspiracy against them. They will all now face a joint trial," media outlets quoted prosecution lawyer R K Yadav as saying.

M. R. Shamshad, a lawyer representing Muslim leaders and victims of the violence, also confirmed that the trio was already facing trial for delivering provocative speeches.

"The judge accepted our plea to charge the leaders with criminal conspiracy and the accused are already facing trial for making provocative speeches that incited Hindus to pull down the Babri mosque,” Shamshad said.

The trio, who are all senior members of Prime Minister Narendra Modi's Hindu nationalist party, had denied any involvement in the destruction of the mosque, but the court ruled there was "enough evidence on record" to bring charges of criminal conspiracy.

On April 19, India’s Supreme Court ruled that the three senior members of BJP, who are accused of inciting Hindu zealots to pull down the 16th century Babri mosque about 25 years ago, should face trial.

Babri mosque in Ayodhya in the northern state of Uttar Pradesh was pulled down by Hindu zealots on December 6, 1992. The demolition led to widespread riots in which thousands of people died.

The destruction of the mosque marked the culmination of a virulent campaign led by the now ruling BJP.

A number of Hindus say the mosque was only built after the destruction of a temple. Some in the BJP want to build the temple on the ruins of the razed mosque.

Several incidents of violence against Muslims and other minority groups have fueled concerns as religious intolerance is growing under the Hindu nationalist government.

India's history is pockmarked by horrific Hindu-Muslim communal clashes in the past.

Tags: Mosque India
Short Link rasanews.ir/201nrZ
Share
0
Please type in your comments in English.
The comments that contain insults or libel to individuals, ethnicities, or contradictions with the laws of the country and religious teachings will not be disclosed