Raas - The comprehensive military campaign by Iraqi military forces to liberate the Northern city of Mosul from ISIL militants continued on Tuesday with local media reporting that the Iraqi security forces managed to take control of a key bridge and a neighborhood as they push further into Western Mosul. 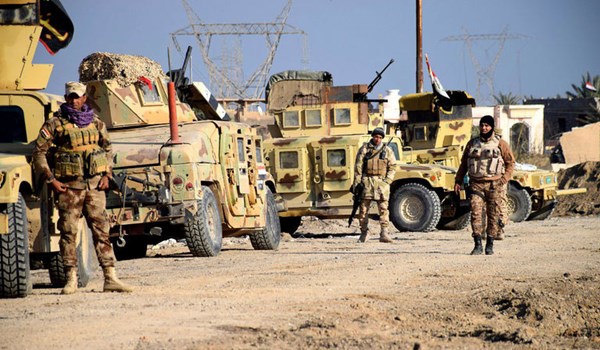 RNA - The comprehensive military campaign by Iraqi military forces to liberate the Northern city of Mosul from ISIL militants continued on Tuesday with local media reporting that the Iraqi security forces managed to take control of a key bridge and a neighborhood as they push further into Western Mosul.

Iraqi security forces managed to take control of a key bridge and a neighborhood as they push further into Western Mosul, the last major urban stronghold of the ISIL terrorists in the country.

Lieutenant General Abdul Amir Yarallah - the commander of 'We Are Coming, Nineveh Operations' - said the Iraqi forces captured the neighborhood of Jawsaq as well as what is known locally as the fourth bridge across Tigris River on Monday, presstv reported.

He added that the Iraqi forces raised the national flag above several buildings in the neighborhood after inflicting heavy losses on ISIL terrorists, without elaborating.

A raid by the Iraqi Air force destroyed an ISIL-operated radio station in Mosul as security forces advance into the West of the flashpoint city.

Al-Bayan radio suddenly fell silent after its office was hit by an air raid, Iraqi security sources and an anti-ISIL activist said, the New Arab reported.

"The radio station's transmitter was struck, rendering it completely out of service. This means ISIL has lost its last media outlet in the city," activist Qusay al-Mosuli said.

Iraqi security forces surrounded Mosul's Southern district of Wadi al-Hajar from South and Southwest, and began advancing toward the ISIL lines to eventually liberate this part of the Northern city from the terror group.

The ISIL militants, however, have put up a fierce fight against the advancing forces, but face intense airstrikes who target ISIL positions in the area that Iraqi forces conduct by the use of helicopters to limit the collateral damage on local residents, Rudaw reported.

An Iraqi senior commander told Rudaw  that it was especially hard for their forces to breach the ISIL concrete defense lines in al-Tayyaran district which was liberated this week, and is next to the Wadi al-Hajar.

The artillery units of the Iraqi army and volunteer forces (Hashd al-Shaabi) attacked ISIL's command center in a region near Tal Afar in Nineveh province, inflicting heavy losses on the terrorists.

"Hashd al-Shaabi and Iraqi army's Brigade 92 pounded with artillery shells a meeting of ISIL commanders near the police center of Tal Afar city, killing 70 terrorists and injuring many more," the Iraqi sources said.

It is now a long time that the Iraqi forces have been trying to win back Tal Afar city and cut ISIL's supply routes to Syria.

The Iraqi popular forces, also known as Hashd al-Sha'abi, also released a video showing the forces attacks on targets in areas occupied by ISIL, with thick black smoke being seen rising from targets after they were hit, NRT reported.

The fighters were able to kill a number of militants and seize their weapons and vehicles, according to their field commanders. Liberated residents are seen in the video welcoming the troops.

Iraqi forces arrested early Tuesday a girl believed to be an ISIL member before carrying out a suicide bombing at a girls school in the security-controlled Eastern Mosul.

A local source reported that the girl, putting on an explosive belt, was on her way to blow herself up inside a girls-only school in Wahda district, Iraqi News reported.

Police sealed off the school’s vicinity, according to the source, who said that many ISIL-linked women had managed to melt within civilians though implicated in brutal abuses against Iraqi women over the past two years.

At least 929 ISIL militants have been killed by the Iraqi Federal Police and the Rapid Response Units since the start of the new phase of the operation against the terrorist group in Mosul, aiming to retake the Western parts of the city.

The Iraqi forces have also managed to take full control over 26 villages and neighborhoods since last week when the Iraqi government launched the offensive against ISIL in Western Mosul, Kuwait News Agency reported.

The operation has led to the destruction of approximately 84 vehicles and dozens of explosive devices, the Federal Police Chief Raed Jawdat announced in a statement released on Monday, adding that during the operation the units have also seized a large amount of weapons and projectiles.

Tags: ISIL Mosul Iraq
Short Link rasanews.ir/201nHN
Share
0
Please type in your comments in English.
The comments that contain insults or libel to individuals, ethnicities, or contradictions with the laws of the country and religious teachings will not be disclosed