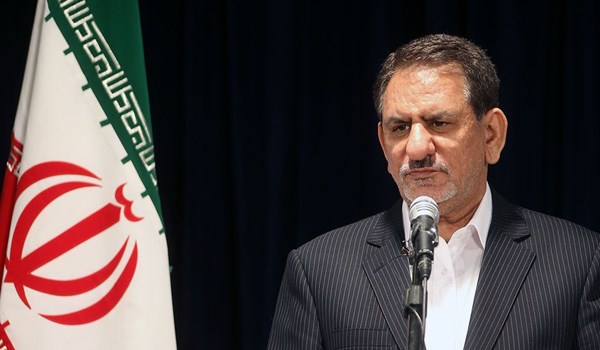 RNA - "Saudi Arabia and others are not powerful enough to carry on with tensions and conflicts with Iran and we aren’t interested in tensions either because we like to have good relations with the regional countries and all the regional states know that Iran has not made aggression against any country in no era and doesn’t think of anything but cooperation with the Islamic countries," Jahangiri said in an interview with the state TV on Monday night.

He voiced regret that novice politicians have been empowered in Saudi Arabia with no historical and geographical knowledge and utter words against their own interests, and expressed the hope that they would return to the path of cooperation and interaction.

His remarks came after Iranian Government Spokesman Mohammad Baqer Nobakht blasted the Saudi officials' statements against Iran as an attempt made by Riyadh "escape forward", saying the terrorist groups in the region are nurtured with Saudi Arabia's financial and arms aid and Riyadh plays a blame game to derail the public opinion from its crimes and find a means to shield itself against international criticism.

"I reject any such report," Shamkhani told FNA reporter in Tehran on Monday.

Asked about Jubeir's recent remarks against Iran and his question why no terrorist operation is conducted against Iran, Shamkhani underlined the high vigilance of the Iranian security forces and people as the reason why terrorists have failed to conduct such attacks in Iran, and said in Iran there is no safe haven for any one to create and nurture the terrorist groups.

"Saudi Arabia and the terrorists can carry out blasts and terrorist acts in places where they have been nurtured."

He said terrorist operations are carried out in countries in which the terrorists live, have educated, receive training and missions for terrorist acts to take revenge for political differences.

These countries don’t have an integrated nation or ruling system and lack a proper security system to fight against terrorism, Shamkhani added.

Tags: Eshaq Jahangiri Iran Saudi
Short Link rasanews.ir/201nHI
Share
0
Please type in your comments in English.
The comments that contain insults or libel to individuals, ethnicities, or contradictions with the laws of the country and religious teachings will not be disclosed