Rasa - Iraqi government soldiers and their allied forces have made more achievements in their push to take back the western flank of the strategic northern city of Mosul from Takfiri Daesh militants. 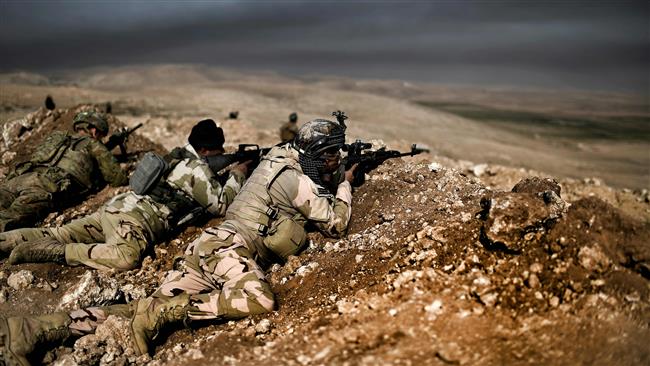 The high-ranking Iraqi military commander went on to say that government forces had inflicted heavy losses on Daesh ranks during the operation, before they hoisted the national flag over a cluster of buildings in the area.

Moreover, a high-ranking figure of the Daesh terror group and three of his close aides were killed during bitter clashes with Iraqi security forces in the Dawasah neighborhood of central Mosul. Government troops could establish control over much of Dawasah on Sunday.

International aid organizations have warned against the mass exodus of hundreds of thousands of civilians from western Mosul.

Makeshift camps are being built up in nine cities near Mosul and tents are being pitched in existing camps to accommodate up to 400,000 internally displaced people.

Elsewhere in the northern province of Salahuddin, Iraqi fighter jets carried out an airstrike against Daesh positions on the outskirts of Samarra city, located 125 kilometers north of Baghdad. Among those killed was the self-proclaimed Daesh governor of Salahuddin, identified as Abu Dajjaneh as well as the so-called Commander of Samara Offensive Abu Abdulrahman.

Iraqi military aircraft also carried out a raft of aerial attacks against Jazira region of the same province, killing more than 50 Takfiri terrorists and destroying a considerable amount of their ammunition in the process.

Tags: DAESH Mosul Iraq
Short Link rasanews.ir/201nHF
Share
0
Please type in your comments in English.
The comments that contain insults or libel to individuals, ethnicities, or contradictions with the laws of the country and religious teachings will not be disclosed