More rounds of Syria peace talks required before any deal

Rasa - UN Special Envoy for Syria Staffan de Mistura has told all parties present at the Syria peace talks being held in Geneva that several more rounds of negotiations would be needed before any manner of accord is reached. 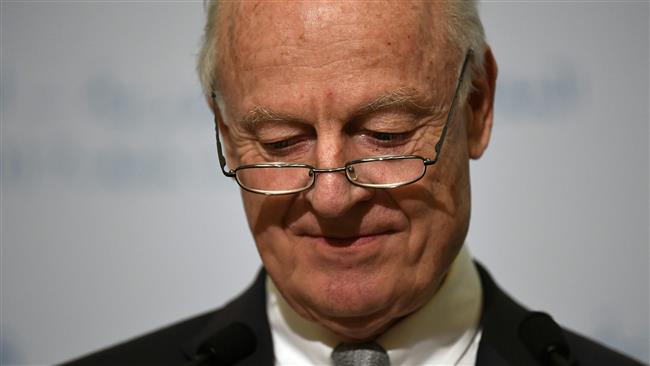 RNA - De Mistura made the announcement on the fourth day of the current talks on Sunday.

He added that by the end of the current session both the Syrian government and the foreign-backed militant groups “would have a deeper shared understanding of how we can proceed in future rounds."

Meanwhile, the main Syrian opposition group has accused the Syrian government of trying to stall the talks, after Syria’s Ambassador to the UN Bashar al-Ja’afari called on all parties to condemn a deadly attack in Homs or be considered "accomplices of terrorism."

On Saturday, simultaneous bombings targeted separate areas across the western city of Homs -- which is largely under government control -- claiming the lives of over 50 people. The Jabhat Fateh al-Sham terrorist group, formerly known as al-Nusra Front, claimed responsibility for the attacks.

"Jaafari is stalling, they don't want to start the political transition," said Salem al-Meslet, the spokesman for the High Negotiations Committee (HNC).

"Just as he is insisting on condemning the incident that happened yesterday, we also demand the regime delegation to tell everyone that they are committed to political transition," he added.

The new round of the UN-brokered intra-Syrian talks come shortly after the conclusion of the second round of the Syria peace negotiations, mediated by Russia, Turkey and Iran, in the Kazakh capital city of Astana on February 15 and 16. Astana talks, which were held in a closed-door setting, sought to pave the way for the negotiations in Geneva.

Late on Sunday, at least one woman was killed and 14 more were wounded as militants fired around 10 mortar shells at Damascus.

The woman was killed and four people sustained injuries after mortars landed in the capital’s al-Mazzeh neighborhood. Ten more people were injured as militants targeted the city’s Northeastern neighborhood of Harasta.

For nearly six years, Syria has been fighting foreign-sponsored militancy. The UN envoy estimated in August last year that more than 400,000 people had been killed in the crisis until then. The world body stopped its official casualty count in the war-torn country, citing its inability to verify the figures it received from various sources.

Tags: Staffan de Mistura Syria
Short Link rasanews.ir/201nGd
Share
0
Please type in your comments in English.
The comments that contain insults or libel to individuals, ethnicities, or contradictions with the laws of the country and religious teachings will not be disclosed