Palestinian officials have demanded a boycott of Israeli military courts after the regime rearrested a freed Palestinian and sentenced him to life in prison. 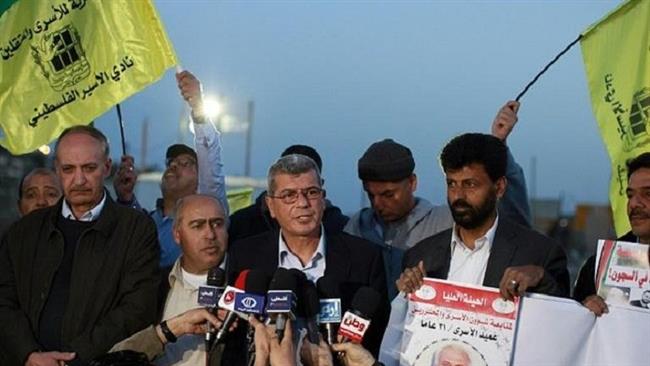 RNA - Qadura Fares, the head of the Palestinian Prisoners’ Society (PPS), made the remarks at a press conference in the occupied West Bank city of Ramallah on Sunday, calling on the families of the prisoners and Palestinian organizations to stop attending the Israeli military trials and to refuse to pay convict’s fines.

He further said that Palestinians had paid the Israeli authorities as much as $6 million last year as convict’s fines imposed by the regime’s courts.

Palestinians detained by Israeli forces are usually brought before the military courts and defense lawyers say they are often not informed of the charges against their clients or allowed to speak with them before the trial.

On February 22, Israeli forces arrested Nael Barghouthi for a second time after he was jailed for life in 1978 but released in a 2011 prisoner exchange. The Israeli military said he had been jailed for allegedly committing “a series of security offenses” nearly forty years ago, but was rearrested for allegedly “violating his terms of release.”

“One must take the difficult decision of rebellion and boycott” of the courts, Issa Qaraqe, head of the Palestinian Authority's commission for detainees, said at the same presser.

He added that the same military court system handed down just an 18-month jail term to an Israeli soldier, who killed a wounded Palestinian back in last March. The controversial ruling sparked rage among Palestinians and right groups.

The United Nations also denounced the ruling and described it as a “lenient” and “unacceptable sentence" for such “an apparent extrajudicial execution.”

Nearly 280 Palestinians have lost their lives at the hands of Israeli soldiers since September 2015, when tensions intensified after Tel Aviv regime forces imposed restrictions on the entry of Palestinian worshipers into the al-Aqsa Mosque compound in East Jerusalem al-Quds.

Tags: Israel Palestin
Short Link rasanews.ir/201nGa
Share
0
Please type in your comments in English.
The comments that contain insults or libel to individuals, ethnicities, or contradictions with the laws of the country and religious teachings will not be disclosed