Rasa - Bahraini protesters have staged a series of fresh anti-regime demonstrations across the Persian gulf kingdom in support of distinguished Shia opposition cleric Sheikh Issa Qassim ahead of his trial session. 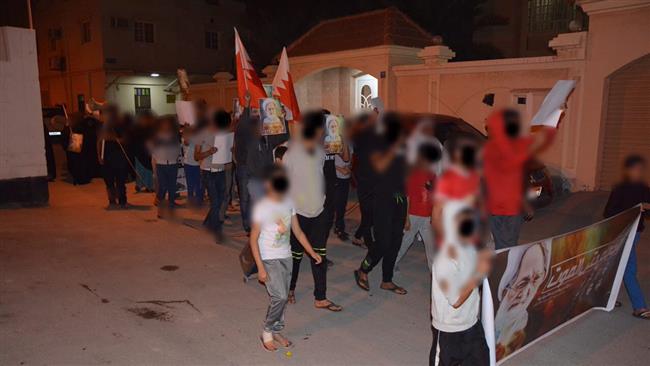 RNA - On Sunday, the angry demonstrators took to the streets throughout the country, including villages of  Sanabis, Muqabah , Markh , As Sahlah, Bilad al-Qadim, Karbabad, Qadam, Karranah, Karzakan , Abu  saiba and al Diyah and Nabi Saleh Island.

They held placards and chanted slogans to express their anger against the ruling Al Khalifah regime’s violent crackdown on protesters.

In addition, a large number of protesters also continued a sit-in protest on al-Fada’ Square in Qassim’s native village of Diraz, which has been under siege by regime forces for months.

Bahrain's judiciary has scheduled a hearing session in the trial of the 77-year-old cleric on February 27 .

A trial session had been scheduled for the senior cleric earlier in the month, but was postponed to February 26 amid fears of a surge in popular outrage.

Senior Bahraini clerics in a statement released on Saturday once again expressed their unwavering support for distinguished Shia cleric.

Last year, Bahraini authorities dissolved the main opposition bloc al-Wefaq National Islamic Society, to which Qassim used to serve as a devoted mentor. They also took away Qassim’s citizenship, accusing him of serving foreign interests and promoting sectarianism and violence.

A vocal critic of the government, Sheikh Qassim has denied the allegations. He has been siding with opposition activists since anti-regime protests started sweeping the country in 2011.

Tags: Isa Qassim Sheikh Isa Qassim Saudi bahrain
Short Link rasanews.ir/201nGZ
Share
0
Please type in your comments in English.
The comments that contain insults or libel to individuals, ethnicities, or contradictions with the laws of the country and religious teachings will not be disclosed