Rasa - Iraq has asked Saudi Arabia to break its silence on the presence of Turkish troops on its soil as the kingdom's hawkish foreign minister visits Baghdad to bring rocky relations out of a long freeze. 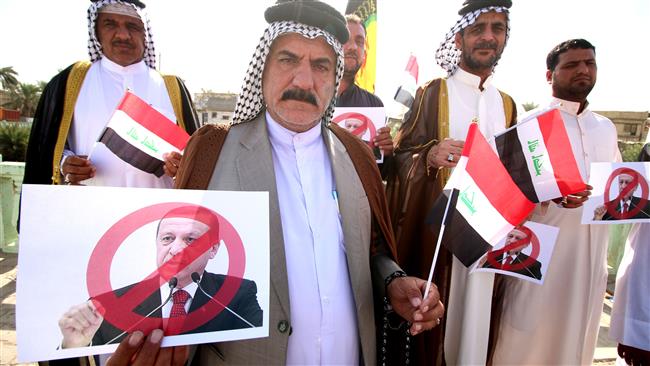 RNA - Iraqi Foreign Minister Ibrahim al-Ja’afari on Saturday received his Saudi counterpart Adel al-Jubeir. This is the first such visit by a chief diplomat from the kingdom since 2003.

According to a statement issued by the Iraqi Foreign Ministry, Ja'afari told Jubeir that Saudi Arabia must break its silence on the presence of Turkish troops in Iraq, the IRNA news agency reported from Baghdad.

"Ja'afari stressed the need for Riyadh's efforts to encourage the Turks into leaving the Iraqi land, stating that despite Arab and international consensus on opposition to Turkish troops, they still remain in the Iraqi territory," the report added.

Iraq and Saudi Arabia have tried to improve strained ties after relations were cut following ex-dictator Saddam Hussein's 1990 invasion of Kuwait but the road to normalization has been rocky.

Thamer al-Sabhan became the first Saudi ambassador to Iraq in a quarter century in January 2016 but had to leave the same year after Baghdad demanded he be removed following his remarks about Hashed al-Sha'abi.

Hashed al-Shaabi (Popular Mobilization) forces have played a key role in the fight against Daesh. Ja'afari was one of the most vocal critics of Saudi Arabia at the time and issued several strongly-worded statements against the kingdom and Jubeir himself.

He conveyed to Jubeir both directly on the sidelines of a global conference on the anti-Daesh war last year and in a statement Iraq's "annoyance" over what he called "unacceptable interference."

On Saturday, Ja'afari told Jubeir that "Iraq's policy is based on expanding relations with all countries of the world but it will not allow any meddling in its domestic affairs," the Foreign Ministry statement said.

The foreign minister also said Iraq "does not meddle in the internal affairs of other countries and has no interest in getting involved" in the lines drawn between some regional countries, possibly referring to Saudi Arabia's rivalry with Iran.

An Iraqi government official said on Saturday that there was an opportunity for Baghdad to bring Tehran and Riyadh together.

"The whole region is heading towards compromise and Saudi Arabia sees Iraq as an important player to have on its side," he said. "Iraq's neutrality could make it a ground for Iranian-Saudi rapprochement."

Saudi Arabia is very unpopular among most Iraqis and often accused of providing direct support to Daesh terrorists who took over a third of the country in 2014.

Saudi Arabia nominally supports the fight against Daesh but Iraq and other partners have argued it needs to do more to help durably defeat Daesh and its ideology which has roots in the kingdom where Wahhabism is freely preached and promoted.

The kingdom has been accused of having both financially and ideologically contributed to the extremism and sectarianism, which has been taking its toll on its northern neighbor.

"Iraq's power lies in unity and integrity among its nation and the Iraqi people have proven that they stand united against terrorism and for preserving their territorial integrity," Ja'afari said on Saturday.

In August 2016, Riyadh withdrew Ambassador Sabhan, but instead of naming a new one, seconded Abdulaziz al-Shammari as chargé d’affaires at its diplomatic mission in the Iraqi capital.

Prime Minister Abadi also received Jubeir and his accompanying delegation, a statement from his office said. Both sides "discussed cooperation in various fields, including the fight against the Daesh gangs," it said.

Ja’afari and Jubeir, meanwhile, expressed interest in reparation and enhancement of the bilateral ties.

Jubeir insisted on the need for bilateral visits, and said there were many elements, promoting the betterment of bilateral ties.

He also claimed that Riyadh treated all Iraqi sects alike and was in favor of unity and calm in the violence-stricken country.

Tags: Turkey Iraq
Short Link rasanews.ir/201nGH
Share
0
Please type in your comments in English.
The comments that contain insults or libel to individuals, ethnicities, or contradictions with the laws of the country and religious teachings will not be disclosed